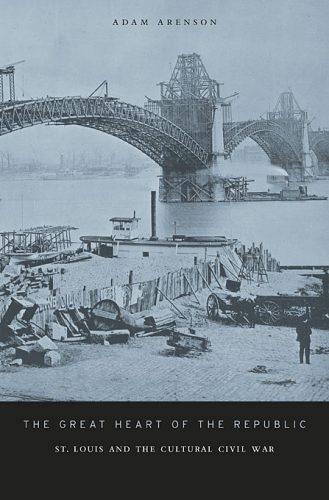 The Civil War revealed what united as well as what divided Americans in the nineteenth century—not only in its deadly military conflict, but also in the broader battle of ideas, dueling moral systems, and competing national visions. Adam Arenson focuses this cultural civil war in St. Louis, the largest city along the border of slavery and freedom. From this vantage point, the Civil War era looks less like a fight between North and South over slavery or the West as a prize, and more like a messy struggle between northerners, southerners, and westerners, a clash among three incompatible regional visions, whose leaders argued about the definition and importance of Manifest Destiny and slavery politics. Arenson weaves this political history with analyses of paintings, architecture, and other cultural products, paying particular attention to institutions such as universities and railroads. The result is a vibrant history of the Civil War era from the heart of the Republic that enriches our understanding of America at a crossroads.

Praise for The Great Heart of the Republic

Named one of the Best Books of 2011 by the St. Louis Post-Dispatch!

Winner, inaugural Charles Redd Center for Western Studies–Phi Alpha Theta Book Award for the best book in history of the American West from 2010 or 2011

“The Civil War can be refreshed….The Great Heart of the Republic describe[s] a culture, more than anything, of dashed dreams wrought by conflict that spun far beyond the control of those who began and sustained the political arguments over slavery and expansion.”
–Ben Cawathra, Blue Notes in Black and White, December 19, 2012

“By looking at St. Louis – the place where northern, southern, and western values collided – Arenson argues persuasively that we can better understand the ways in which civil war left the nation profoundly altered, but not transformed, and still deeply divided.   Arenson’s study and his conclusions are thought-provoking.” –Megan L. Bever, The Civil War Monitor, December 12, 2012

“Whether the city’s dreams were more western than urban, or more proslavery than antislavery, Arenson deserves praise for advancing an argument that will spark debate, and he has succeeded in showing that St. Louis was a critical site for understanding the Civil War era.” –Frank Towers, Civil War History, September 2012

“The lucidly written narrative, which includes events, actions, actors, and voices on the local, regional, and national level, is the central creative achievement of this book. The story has never been told so well and with such balance and inclusiveness. It is a tale of bright national hopes and expectations dashed on the rocks of geopolitical reality, told through the prism of ‘cultural civil war.’” –Timothy Mahoney, Pacific Historical Review, August 2012

“This book is a ﬁne achievement that will garner a broad audience, probing the ‘big questions’ of nineteenth-century American history and eloquently interweaving the local and the national.” –Robert J. Gamble, Planning Perspectives, August 2012

“The chapters dealing with the Civil War are some of the strongest.…Arenson does an excellent job of showing the underlying ethnic, class, and gender dimensions of loyalty and disloyalty in this divided city.…Throughout the book, Arenson deftly weaves national political history with analyses of paintings, architecture, and other cultural products.” –Michael Bernath, Journal of Southern History, August 2012

“Utilizing a truly impressive array of sources…Arenson has crafted a local story that provides insight into the history of the nation as a whole.” –Kim M. Gruenwald, Western Historical Quarterly, Summer 2012.

“Now that the [Civil War] sesquicentennial is upon us, is it time for a new way of thinking about and understanding what the nation went through 150 years ago? If it is, the first book of that new wave just might be The Great Heart of the Republic: St. Louis and the Cultural Civil War.…Listeners, you will want to read this book.” –Gerry Prokopowicz, Civil War Talk Radio, March 2, 2012

“In this short book, Arenson manages to identify an overwhelming array of issues that deﬁned the American cultural ethos between the years 1848–1877. Arenson produces a highly provocative thesis that captures and explains regional alliances through a cultural prism…Arenson has something new to add to the literature of the Civil War, and he does so with a wonderfully nuanced argument and deft pen. Sure to have an enduring impact, this book delivers.” –Stephen D. Engle, The American Historical Review, December 2011

“This book views the Civil War from a new perspective….Not only is [Arenson’s] perspective on the era refreshing, but his imaginative use of sources also allows him to tease new meaning out of the evidence.” – Lawrence O. Christensen, Journal of Interdisciplinary History, Winter 2011-2012

“Arenson does not filter the narrative of the cultural civil war through a nominal local point of view; the result is much more refined…. The Great Heart of the Republic is both a local and national history and Adam Arenson’s style is balanced and exhaustively researched.” –  Mark Sullivan, 49th Parallel, Autumn 2011

“The Civil War is just a part of Arenson’s wide-ranging investigation….A shining example of vast page length not being a requirement of interpretive depth, Arenson’s work succeeds as both city study and broad social history. The Great Heart of the Republic is heartily recommended reading for students of westward expansion, the Civil War, and Reconstruction.” – Andrew Wagenhoffer, Civil War Books and Authors, August 2011

“A beautifully written and strikingly original interpretation of the causes, conduct, and consequences of the war…. Arenson’s book offers a much broader interpretation of the Civil War….Arenson’s work is wide[-]ranging and ambitious, covering art, architecture, and historical memory as well as the history of politics and policy. Most provocatively, Arenson coins the term “the cultural civil war” to characterize the complex conflict that tore St. Louis and the nation apart during the middle of the nineteenth century.…[I]t forms the heart of his efforts to reimagine the contours of the sectional conflict. From the perspective of St. Louis, the Civil War was not simply a political struggle between North and South over the future of slavery in the territories. Instead, it involved the aspirations, prejudices, and tensions between rival ethnic, racial, and regional groups….[R]eaders will discover a creative history of mid-nineteenth-century America in microcosm.” – Andre M. Fleche, H-CivWar, H-Net Reviews, June 2011

“Describing the West as an equal player in the cultural battleground of the Civil War, Arenson shows St. Louis as…, at times, exploiting the strain between the two [North and South] to advance western political objectives.” Arkansas Historical Quarterly Book Note, Spring 2011

“Arenson’s account…flows more like a novel than what one might expect from such a deeply researched, academic investigation. His straightforward writing style pulls you along, immersing you in the political wrangling of the times and introducing you to information that explodes some of St. Louis’ favorite historical myths….Arenson’s book is absorbing and refreshingly short—an easily digestible 222 pages, not counting the extensive and fascinating bibliography. If understanding history is a way to help us avoid repeating it, the book offers more than just a new and intriguing prism through which to view St. Louis’ past: It’s also a guidebook to the future….It’s a story that I recommend you read for yourself.” – Gloria Shur Bilchik, DailyKos and Occasional Planet

“Arenson takes a fresh look at the pivotal role played by St. Louisans who stood at the crossroads of 19th-century America, both geographically and politically…. Although Arenson is tackling huge historical topics — Manifest Destiny and the politics of slavery — his narrative is driven by the local ambitions of a city that viewed itself as the gateway to the nation’s future. While most Civil War histories focus — understandably — on the North and the South, Arenson takes the Western view.” – Mary Delach Leonard, St. Louis Beacon