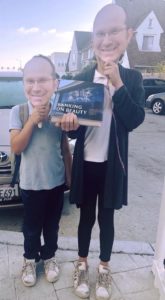 Two young fans of the book show it “out in the wild” of southern California. Photograph by Kim Silverstein. 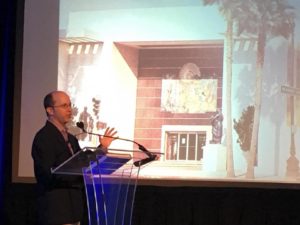 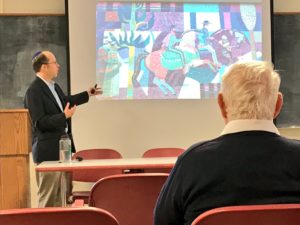 Speaking at the University of California Berkeley.

I know it has been a long time since I posted on this blog — but I have been able to meet many Millard Sheets enthusiasts at book talks and other public lectures across California over the past eight months! It has been so wonderful to talk about this project with Sheets Studio artists, Sheets family members, in Sheets Studio buildings, and even on public radio!

I am honored that the book has been recognized as “bring[ing] attention to main street architecture with real design value and the impact of individual grassroots efforts” through the 2018 DOCOMOMO US Modernism in America Awards. And I am grateful that the Archives of American Art highlighted the book in its July e-newsletter.

With the book published, more local Millard Sheets enthusiasts and preservation advocates have found me, and so I have some updates:

• The 1980 Long Beach mosaic that was painted over has now re-emerged, with a formal rededication scheduled for October 2018. Learn more here and look for the unveiling photos soon!

• Despite having voted for the building as a local landmark in 2017, the Santa Monica City Council signed an agreement with the building owner in September 2018 to allow it to be demolished, with “four pieces of artwork” to be preserved within the city. Given the large mosaic, the stained-glass windows, and at least two large sculptures, it is unclear whether all will be preserved; read what we know now, here.

• The trees in front of the Home Savings at Lombard and Van Ness in San Francisco have been cut down, and so the mosaics can finally be seen again for the first time in decades! Here’s my photograph from the first day they were visible, in March 2018: 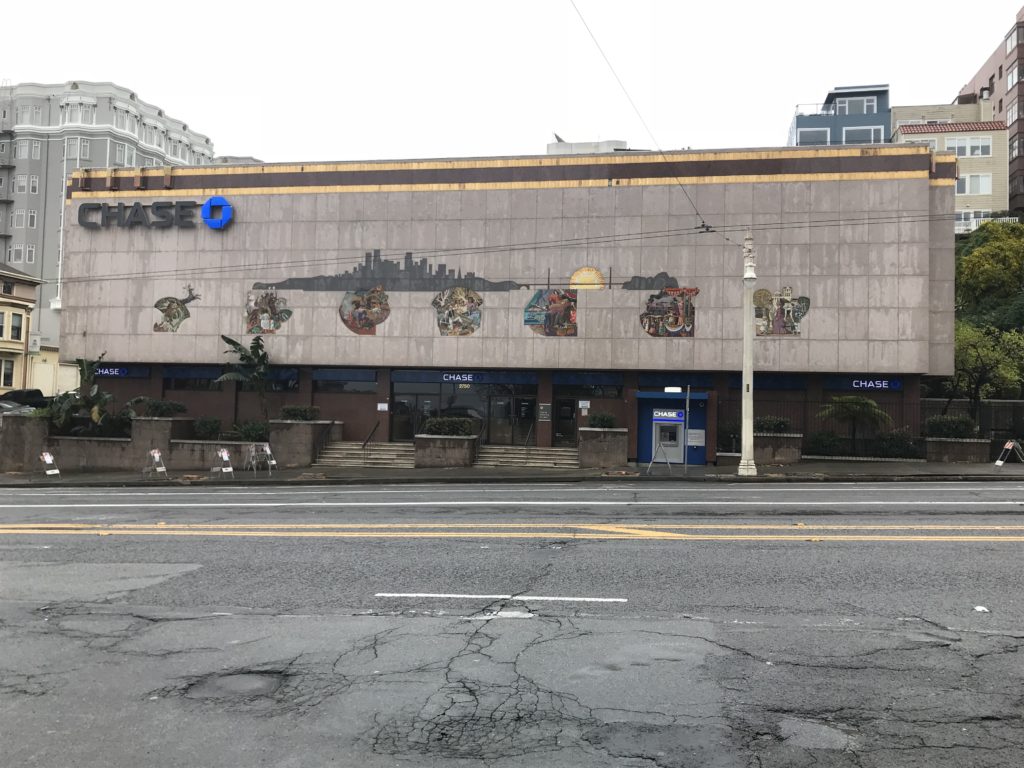 My photograph of the Lombard branch, San Francisco, March 2018, when the trees were cut down and the mosaics revealed again for the first time in decades.

• I was also able to see three artworks for the first time: a Nancy Colbath-designed mosaic in Borrego Springs, and a sculpture by Gwynn Merrill outside the former Home Savings at 200 California, and a Parable of the Talents completed by Millard Sheets and Sue Hertel for a Dallas savings-and-loan in the 1950s, now on display at Biola University: 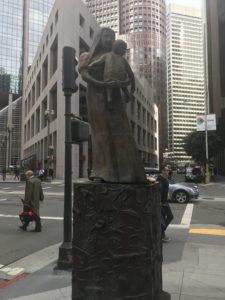 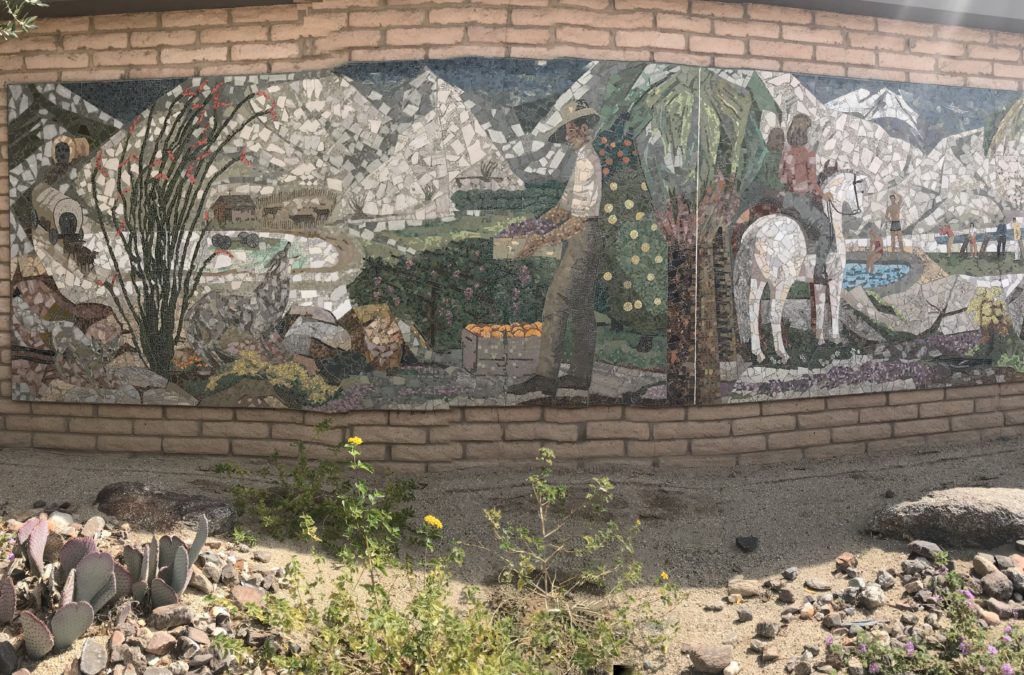 My photograph of a section of the mosaic by Nancy Colbath in Borrego Springs. 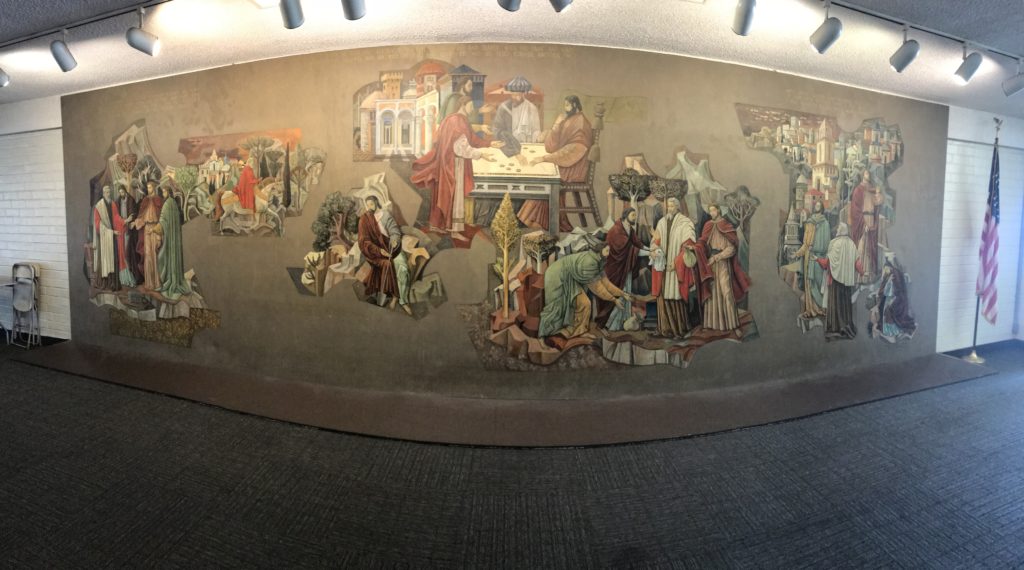 My photograph of Millard Sheets and Sue Hertel, Parable of the Talents for Dallas savings-and-loan, now at Biola University.

• In the book, I follow Denis O’Connor’s notes suggesting that the bird mosaics for Vallejo were demolished. Reader Ted Ellison happily has proved me wrong, and he has sent along these recent pictures of the building. Do note, though, how some floodlights have been placed over sections of the mosaic: 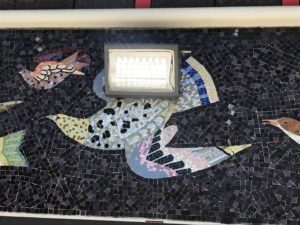 Ted Ellison, 2018 photograph of former Home Savings in Vallejo, artwork by Denis O’Connor and Studio. Note the floodlight cut into the rear mosaic (not the same one as above).

• In the book, I suggest that the El Sereno branch never had any Millard Sheets Studio artwork; in February, I met a woman who used to bank there who said there was likely a mural behind the tellers. I haven’t been able to learn more, but if you have any more information about this branch, please let me know!

I am so glad that this research is published, and that it has found an audience among those interested in Mid-Century Modern art and architecture, suburban main streets, community history, and more! I hope to continue to organize events to discuss this research, and to help communities with preservation efforts — I look forward to hearing from you!