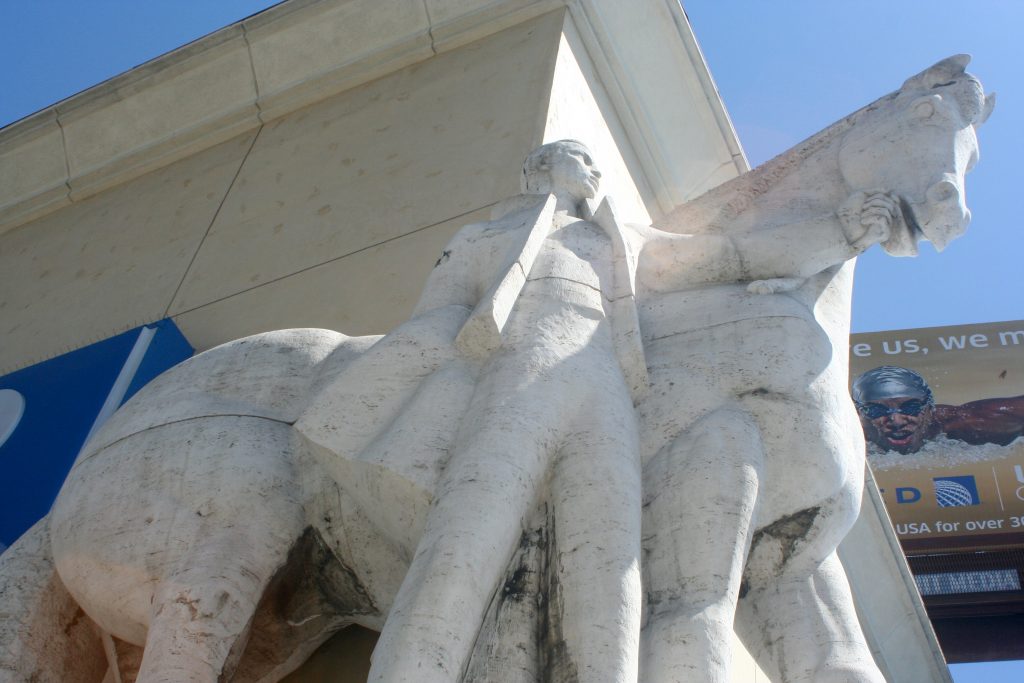 Hello! Curbed LA has been posting great materials for their Millard Sheets Week, drawing on this blog, the L.A. Conservancy tour last March, and their reporting. Great stuff, and welcome to their readers!

I am back to teaching at UTEP and so back and forth from LAX a bunch again. And so I have had occasion to visit this Millard Sheets Studio sculpture, originally commissioned for United Financial (or Imperial Bank — see below), and to observe it odd bedfellows on the corner of Manchester and Sepulveda.

From the Sheets Papers, it seems the sculpture is of marble, and is credited to Bill Megaw. (UPDATE: The commission is listed in the Albert Stewart memorial volume as “Horse and Man,” 1957.) It reflects, to me, the pose in George Caleb Bingham’s Daniel Boone Escorting Settlers through the Cumberland Gap and some pioneer sculptures around the country, as well as Lawrence Tenney Stevens’s Monument to Young Farmers which I just saw again, along with Tony Sheets and his wonderful exhibit at the L.A. County Fair. According to the correspondence from 1975 between Sheets and Kenneth Childs, once a Home Savings executive, it is marble, and by Bill Megaw. BGuilt for United Savings Bank, there was an effort to move it for Imperial Bank. Clearly, it stayed in place! 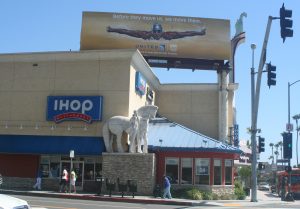 Bank sculpture and its current setting, Manchester and Sepulveda, 2012

It is also a reminder of how many projects the Sheets Studio did. S. David Underwood, the subject of some upcoming posts, was the primary Sheets Studio architect, and with Rufus Turner and others they worked on Home Savings, but also on interiors, remodels, and other buildings that sometimes showed the same style–and sometimes were completely different. In the “definitive list,” which needs updating, there are lots of occasions where the Sheets Studio did a mosaic, or ordered furniture, or something, and so many traces of their influence on Mid-Century Modern art and architecture  hiding around town–or already lost.

More examples in the weeks to come, but just one here: late in life, Millard Sheets provided a video oral history for Home Savings at his home in Gualala, taped by a time led by George Underwood. In that account, he mentions that Howard Ahmanson contacted him about the Home Savings work after seeing a March 22, 1953, article in the L.A. Times about Sheets’s work for Pacific Clay Products, at 4th and Bixel, which helps date their collaboration. The building is now the offices of the Children’s Home Society of California, and I don’t think the interior or exterior show influence of Sheets’s work — if so, let me know! — but it did launch a legendary partnership. And that is the most prominent of the ways the Sheets Studio work is hiding all around us.