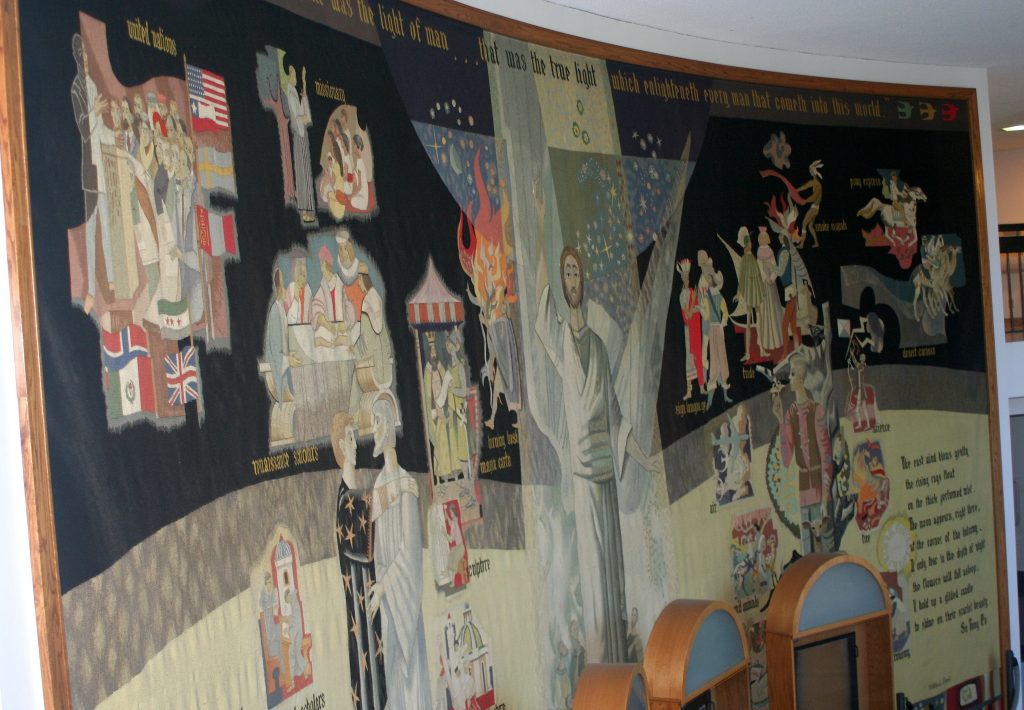 In late December I had a chance to go see the Loyola Tapestry — one of the most detailed and clearly the most labor-intensive of the Sheets Studio projects, surpassing the “Touchdown Jesus.” It is obviously not bank art, but it is art intended for public display, reflecting on world history, and an amazing example of Sheets’s work in another medium.

Conceived as part of a gift from Edward Foley for a communications art center designed by Edward Durrell Stone, only the cartoon stood ready at the building’s dedication, in January 1964. According to documents I found in the LMU archives, it took seven weavers (working an inch a day) two years and three months  to create the tapestry, which is reputed to be the largest modern tapestry in the Americas and the third-largest in the world. Eighteen feet by thirty-four feet, it was hung in March 1966.

According to the press release, the design emerged from “long and serious analyses of the them concept” by Rev. Charles Casassa, S. J., the university’s president at the time, and Mr. Foley, working with drawings that Sheets evidently provided.
What is even more remarkable is the extensive description Sheets himself provided for a pamphlet at its dedication. A few words of description exist for many of the bank openings, but nothing like this:

The Loyola Tapestry, especially designed for the foyer of the Edward T. Foley Communications Arts Center on the Loyola University of Los Angeles campus, symbolizes the meaning and means of communication created by man.

The total theme has been divided into three basic areas: communications from man to man, from man to nature, and between God and man.

The central figure of Christ with the Wings of God symbolizes man’s search to understand the Infinite and his own spiritual faith.

On the extreme left side of the Tapestry is the theme of communication between man and man. The symbols of scholarly and creative expression are noted in the small vignettes that surround the two figures indicating brotherly love. The smaller symbols of the Renaissance scholars, the Magna Carta signing, the United Nations, missionaries, the various arts are all facets of man’s desire for cultural, social, and political understanding. The small band of symbols at the bottom of the Loyola Tapestry on both sides are expressive of the techniques man has developed as means and methods of communicating. Various alphabets, printing, telephone, motion pictures, and communication techniques are included.

On the right side of the Tapestry, communication between man and nature is pictured by the central figure of the young man’s love of plant and animal life. The smaller symbols represent man and his use of fire for warmth and cooking, the domestication of animals, conquering of air, water for food, and related ideas.

The total theme is designed to indicate many of the great accomplishments of man in insight and inventiveness to express the variety of urges and feelings he needs to express to others.

I would also hope that in the spirit of the Loyola Tapestry the beholder will sense the possibilities of the infinite future of new and greater means of communication that lie ahead if discipline and imagination are matched with a deeper desire to face the great problems of our times. Man desperately needs to improve all present techniques for communication. He must determine greater objectives for each separate language and skill if mankind is to enjoy a future with assurance and depth. 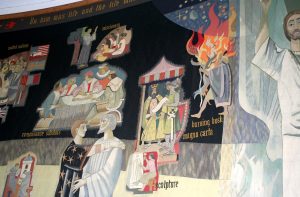 On its edges are quotes from the Gospel of John, the 12th-century Chinese poet and painter Fu T’ung-Po, and the 20th-century Jewish philosopher Martin Buber; add that to the Pony Express, the United Nations, the large figure of Jesus, and you get quite a capacious image of communication. It also makes an interesting contrast with Cold War-era brochure about the need for such a communications center: “In olden days the enemy poisoned wells,” it declared. “Today the enemy poisons men’s minds,” and hence it was time to fight back with communications arts–marketed quite differently today, amidst the cell phones, Facebook revolutions, and satellite TV. 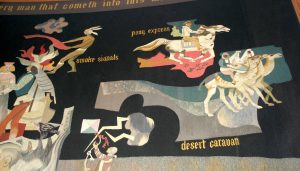 How exactly this all came together — that Foley decided he wanted artwork in the foyer, and to pay for a tapestry rather than a mosaic or painted mural; that such a wide-ranging set of quotes and images were best for the new communications building at a Jesuit college; and that Sheets, as a Protestant, became the artist of choice for Catholic institutions from Loyola to Notre Dame to the “Triumph of the Lamb” in the Basilica of the National Shrine in Washington, D.C. — remains unknown to me. I do know that Martha Menke Underwood, who had worked in Sheets’s studio, was dedicated to the art of tapestries in these years, and that the Sheets Studio had produced some tapestry designs for banks as well.

Thanks to the LMU Archives for their help in finding and copying items from their collections.