This weekend I was on the Jewish World Watch walk to end genocide in Woodland Hills, strolling with thousands through the mostly deserted streets of the Warner Center early on a Sunday morning. But when we turned onto Victory Blvd., I saw it — one of the last Home Savings banks. I ran off the walk path and snapped some photos.

This branch was in the news in November–apparently, Costco and the mall giant Westfield plan to tear down this former Home Savings to build a big-box store–with its back wall facing Victory Blvd.

This is not the work of Denis O’Connor, Millard Sheets, or Sue Hertel. The artists were Marlo Bartels and Astrid Preston, who had collaborated on two of these late Home Savings banks. (Why Home Savings started contracting artists outside the Sheets Studio is a question I have on my to-research list. Leads welcomed!)

I spoke with Astrid Preston in the fall, who described her efforts to link the mosaic to the community, showing the mix of office towers and residential buildings in a leafy setting, much as the Warner Center/ Topanga Mall environs appear today. The Sheets Studio often started with historical sketches and photographs; this mosaic was more about the contemporary moment, and was researched by driving around the neighborhood.

Doing the math, I figured out that this is the last exterior Home Savings mosaic in California. (According to my records, the last California mosaic is in the lobby of the La Cañada branch, installed 1990, and the last Home Savings banks with mosaics were done in Illinois and Missouri. All of these were done by Denis O’Connor Mosaics.)

So I knew about the bank, but going there provided a few revelations: first, the bank is set deep into a parking lot, typical of a modern mall but unlike almost any other Home Savings location. (Compare to the placement of the Westminster location, adjacent to the mall but still prominent on its own road.)

Second, you can see that there was an effort to maintain the look of the Home Savings bank, as we have discussed, but to try and do so with much cheaper materials and styles. Out went the hand-cut glass smalti; in came the painted, flat ceramic tiles. Out went the large travertine tiles; in came smaller specimens. 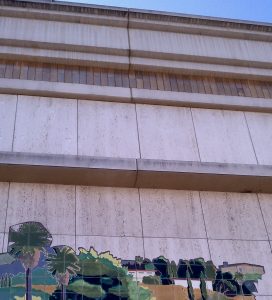 And, most tellingly and least effectively, out went the Interpace gold tiles used to mark the roofline, and in came quite inferior metallic gold tiling, vertical and undistinguished.

So the bank has a feel of Home Savings, but not the true romance and beauty of the original banks. I didn’t wander inside, but the interior looked undistinguished as well; I do wonder, as the LA Times article suggested, if the mosaic could be preserved and placed in any future wall along Victory Blvd. — something much more like what the original Home Savings had intended.

I will take a break for Passover/Easter Week next Friday; more mosaics to follow after.