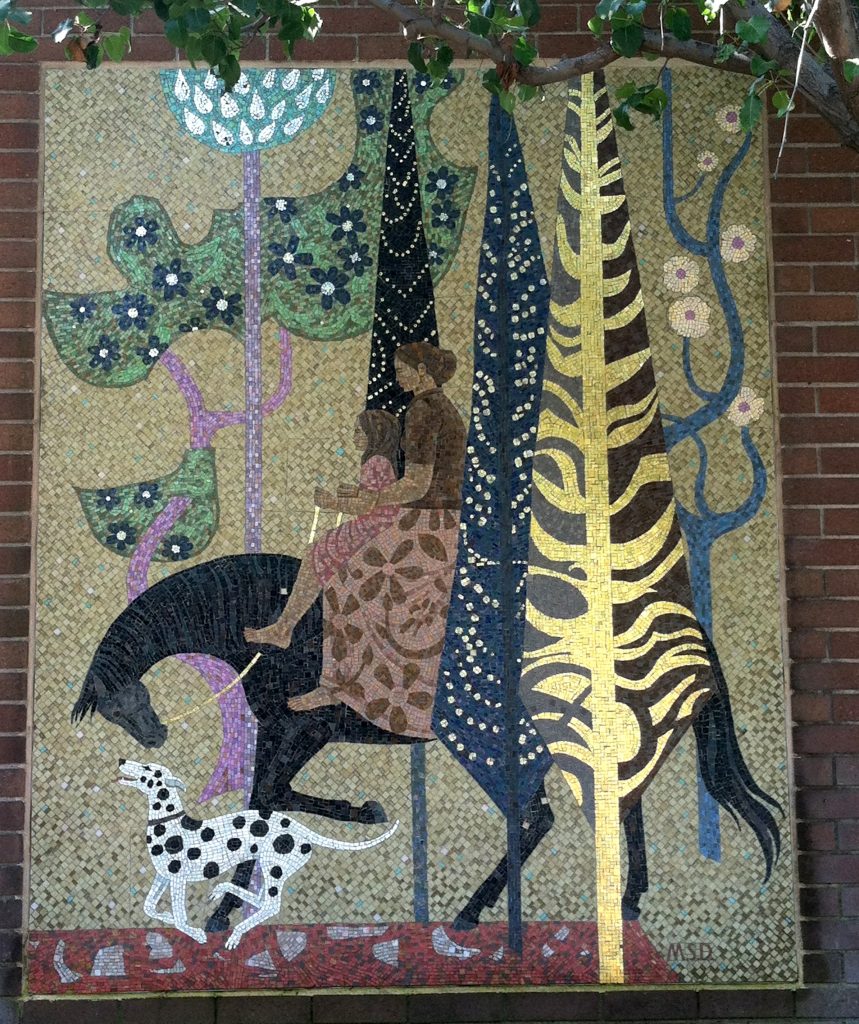 For decades after its acquisition by Howard Ahmanson in 1947,Home Savings and Loan had its headquarters along Wilshire Boulevard — first in Beverly Hills, and then in Los Angeles, and finally, in 1985, to a campus in Irwindale. When Home Savings was purchased in 1998, the headquarters was transferred to Washington Mutual.

Now they are two of the three buildings in the renamed San Gabriel Valley Corporate Campus, its office suites are leased by CBRE, the large commercial real-estate services firm (which also manages former Home Savings properties in Coronado, Santa Monica, and Montebello, among other locations, sold by Home Savings to Met Life in the 1980s).

Some wonderful art–mosaics, paintings, fountains, and sculptures–were commissioned for the campus from Joyce Kozloff, Richard Haas, Astrid Preston, and others. (A nice post and illustrations of Kozloff’s work from friend-of-the-blog Vickey is here.) All of it seems to be still on site except the Preston works from the cafeteria walls, which JP Morgan Chase took after they acquired Washington Mutual, and no one quite seems to no where they went. (Leads, as always, welcomed.) 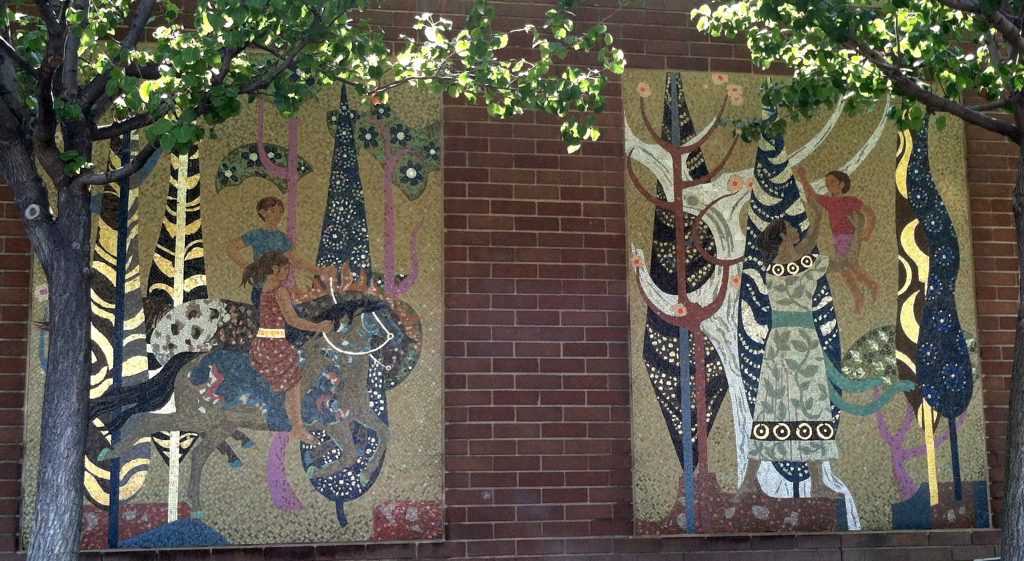 But the most remarkable find on campus for me were these three mosaic panels, installed on a brick wall to the right of the second building’s entrance. Showing a woman and children on horseback, a woman lifting a child into a tree, and a Dalmatian frolicking alongside, these joyous mosaic panels highlight the family themes so common in Sue Hertel’s work for the Millard Sheets Studio, as well as the angular trees, touches of gold, and intricate patternwork that Sheets himself was fond of.

Unlike any other Home Savings work I have seen, the panels are signed MSD — for Millard Sheets Designs, perhaps marking another moment in the evolving attributions in the Studio’s mosaics, from just Millard’s signature to a period of no signatures and then works completely designed, fabricated, and signed by Sue Hertel and Denis O’Connor. (In this case, Brian Worley has a distinct memory of doing that Dalmatian.)

These are intimate family scenes, but not linked to any specific place. To me, they suggest Sheets Studio designs elsewhere: the woman holding the child echoes Burbank and Pomona, while the children on horseback in a forest echo Burbank and Highland Park. A number of Sue Hertel’s designs show frolicking animals; for dogs, the Studio City stained glass and the mosaic in Anaheim come to mind.

These hints, once matched with Brian’s recollections, helped me realize what they are: the temporary mosaic panels, made in frames and intended to be installed in temporary Home Savings branches throughout the Southland, while their permanent buildings were built. (My research suggests they were built for a temporary location in downtown Los Angeles, possibly at 7th and Figueroa, 1974, and may have been displayed at later temporary branches in Westminster, Riverside, and Santa Cruz.)

I can’t say this is the most prominent file home for these mosaic panels, but they do seem appreciated by CBRE, on a campus that once thronged with Home Savings employees.

Thanks to Jason Bonomo of CBRE for giving me a tour of the Home Savings artwork on the property, and to Brian Worley for helping to identify the panels.