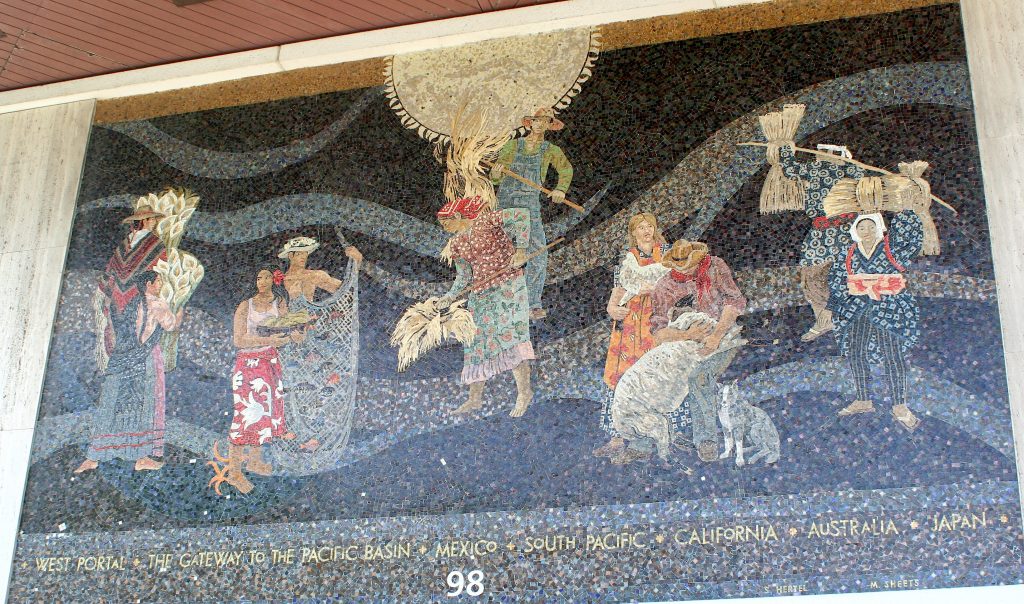 Following up last week’s post and staying at San Francisco’s West Portal, if we walk outside, we encounter the most international of the Home Savings artworks, the Sheets & Associates “Gateway to the Pacific” mosaic.

The concept of a Pacific Rim, interconnected by commerce, entertainment, migration, and cultures, is an old one — statues in Easter Island suggest that these connections may predate Christopher Columbus’s voyages. But the 1970s saw a return to thinking about the Pacific Rim, with President Nixon’s visit to China, the rise of the Japanese economy, and the start of the “Asian tigers” economic phenomenon, and the flood of goods made in Japan, Taiwan, or Hong Kong.

The representative figures from each Pacific Rim nation come in pairs, a man and a woman, and each is engaged in what might be seen as a representative task, a labor linked to agriculture. From what I can tell, the Mexican couple carries flowers (calla lilies), the South Pacific pair a fishnet and fruit; the Californians wheat (I think; very hard to tell); the Australians care for sheep; and the Japanese carry also carry grain bushels.

The figures do not interact, and do not appear in geographic order; four of five men wear sunhats. Only the Japanese woman looks out at us; all the rest are engaged with their labor, or the labor of their partner.

This is a very unusual work, not only for the international theme. Besides the large sun overhead, which (given its inclusion in the Beverly Hills, Encino, and other mosaics, is a kind of Home Savings theme), there is no way to look at this and say, immediately, this was a Home Savings artwork.

What it looks more like was the artwork that Millard Sheets created after his trips around the world, and in commissions for United Air Lines and other international-themed places. Though exhibits like the LA County Fair exhibit organized by Tony Sheets highlighted this international side of Sheets’s work, it seems a world away, literally and figuratively, from the standard Home Savings topics and designs.

Given the radically different artwork that Sheets, Hertel, and Denis O’Connor created independently, outside of the context of the Home Savings work, makes me wonder where the “Home Savings style” originated. Sheets did the original designs, and so the answer lies with him, in one sense, but — the early works like Beverly Hills also feel atypical, in their way, and Sheets, in any case, had to have some idea of what Howard Ahmanson wanted for Home Savings.

Sheets chose California community themes, but were those works only possible in one style? Clearly not. Mosaic makes certain demands; so stained glass, and so Sheets and Hertel, painters by preference, made concessions to form. But the differences so evident here — the colorplay in the tiles, the abstracting lines, the sun are the same, but the figures seem cut out of a totally different scene.

Which Home Savings artworks seem not like the others to you? (I have another in mind, which we can see next week.)