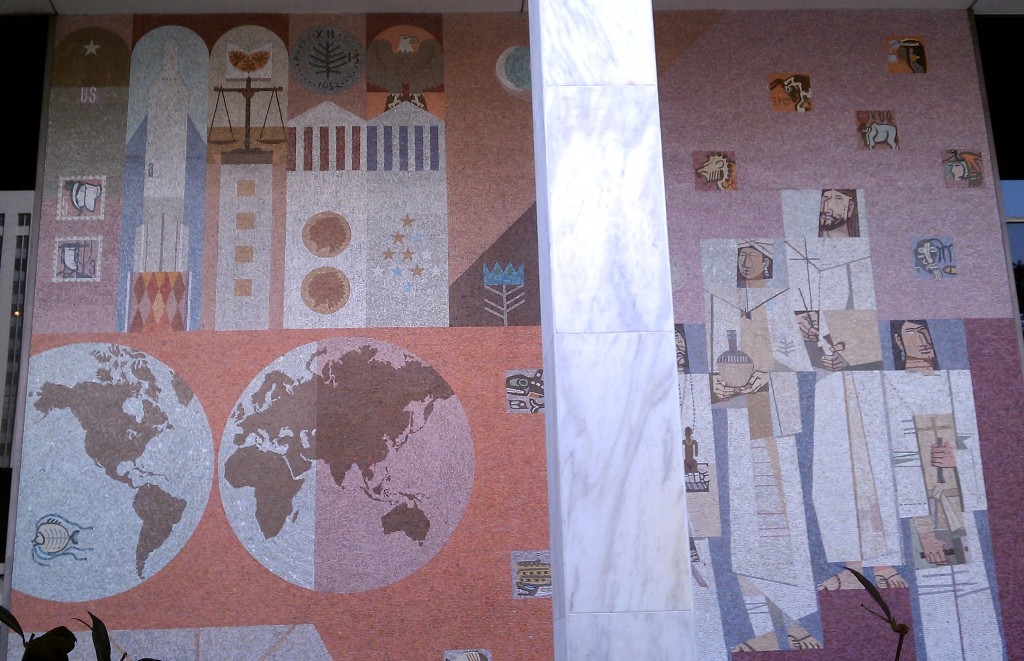 As a quick follow-up to my recent posts about the Sheets Studio’s relationship with the Ravenna Mosaic Company and the questions of religious symbols in artwork for public patrons, I present these mosaics, designed by Richard Haines for the federal building at 300 N. Los Angeles Street in 1963.

Among other reasons for interest, this demonstrates the staying power of Ravenna Mosaic Company as the fabricator of choice. The use of mosaic with marble columns and the change of color planes divided by diagonal lines are very reminiscent of Sheets’s work—though I find this artwork flatter, in all senses of the word, than the Sheets Studio work. (Haines’s work at UCLA, on Schoenberg Hall and the Physics Building, seems more lively and fun.)

UPDATE: Just after posting,  I have learned via John Waide and the Ravenna Mosaic archives at St. Louis University, that Sheets, Haines, and a mosaic designer listed only as DeRosen (likely Jan Henryk de Rosen) had all bid for the UCLA Music Hall job in 1954, but that Haines eventually received it. 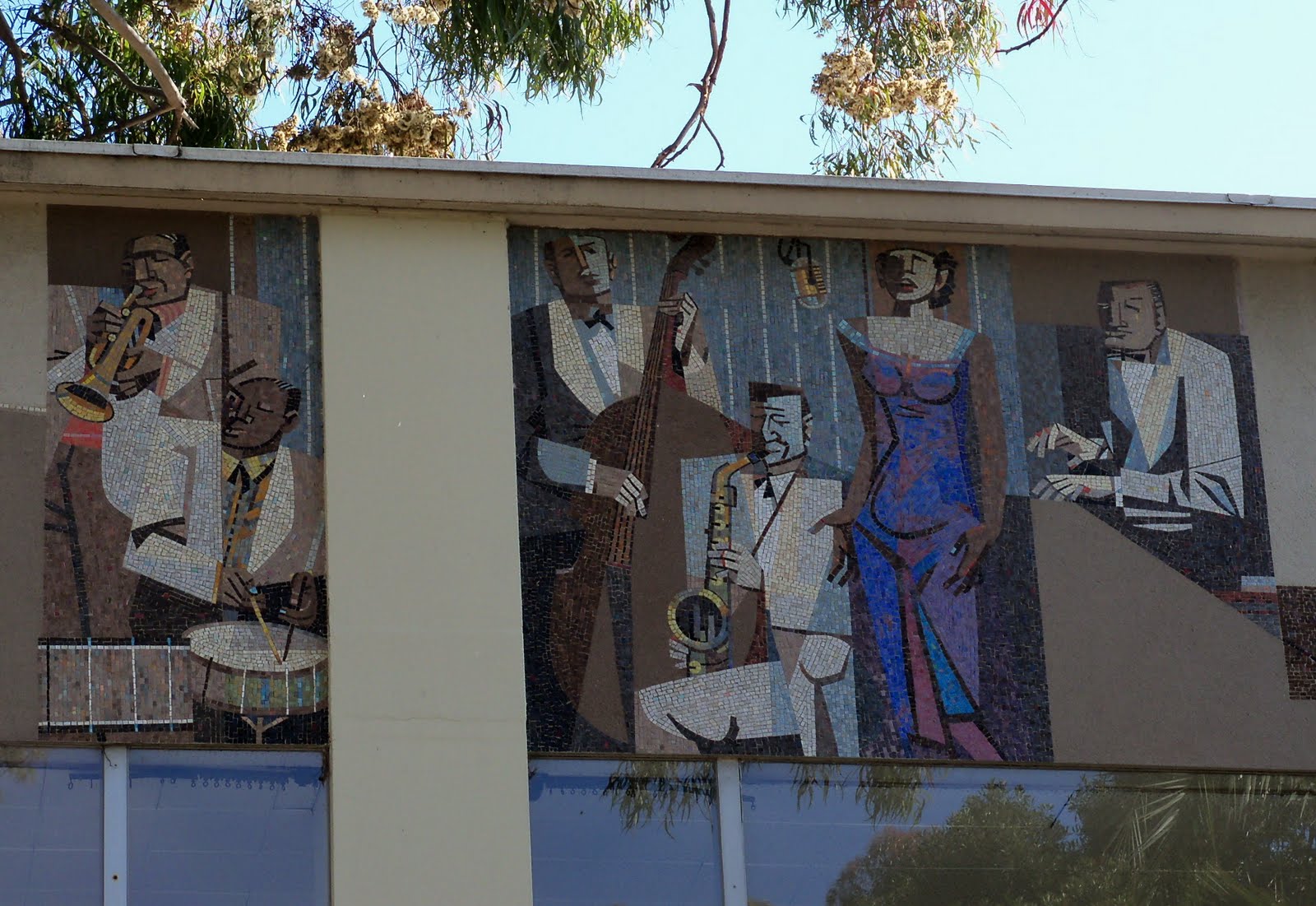 Beyond the design and the fabrication, the universalized themes of “Celebration of our Homeland” and “Recognition of all Foreign Lands” also contributes to that rather blah feel—perhaps a demonstration of the way, in the early 1960s, a government commission could be more limiting than work with a financial institution, despite the risk-averse and “conservative” nature of each. (For comparison, these mosaics appeared at that time at the downtown Home Savings branch—and Sheets’s tile mosaics for City Hall East are vibrant visions of a universalized theme. More on them one of these weeks.) 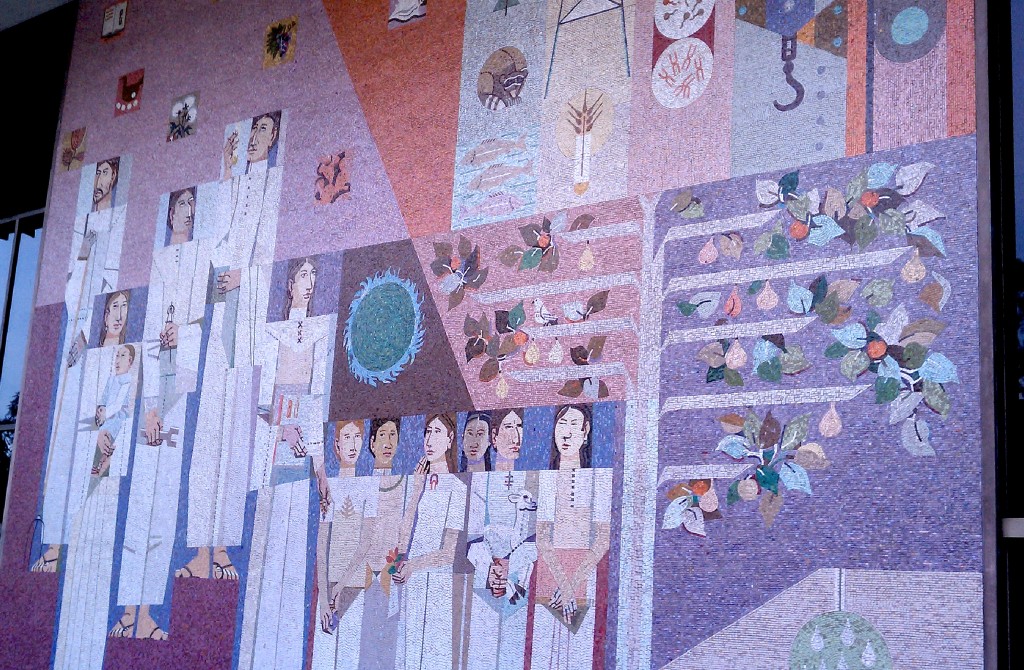 The mosaic depicts many symbols of justice and harmony, showing two hemispheres, flowering trees, small images of animals and industry—and then collections of white-robed people, carrying gifts and tools. Though perhaps no more than one is holding an overtly religious symbol, the sense of a procession and of communal action in white robes is as evocative of a choir and a baptism as much as the Parthenon frieze or the art and architecture of the United Nations. But perhaps evocative is the key word–no explicit religious symbols, and hence no controversy?

Back next week to Sheets and Home Savings.