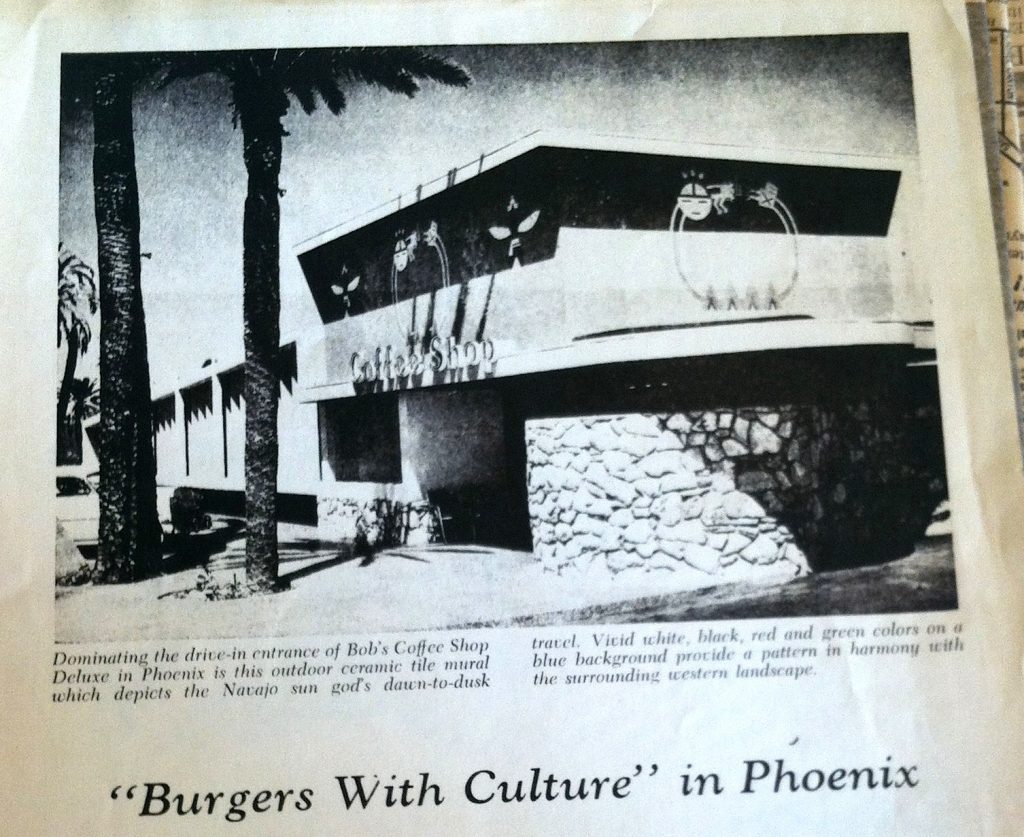 As discussed last week, S. David Underwood, the Sheets Studio’s principal architect, got his break working for a Glendale chum, Robert C. Wian, as he expanded Bob’s Big Boy into an iconic franchise.

The Bob’s Big Boy in Burbank is a Googie icon, designed by Wayne McAllister, is a historic landmark. But the Phoenix’s Bob’s restaurant, designed by Underwood — which had mosaic work designed by Millard Sheets — seems to have been destroyed.

Underwood’s extant drawings show the Phoenix franchise was conceptualized as a near-copy of the Burbank location, but that subsequent designs changed the elements, though still within the Mid-Century Modern/Googie/drive-in styles.

A large, billboard-like neon sign with the Bob’s name, arches flying over the driveway entrance, and alternating black and white panels mix the feel of Sheets Studio designs–and this was one–and the Bob’s Big Boy checkerboard pattern. Sketches and photographs show how the wall design and counter layout were all carefully planned, with the Sheets Studio sense of interior precision. 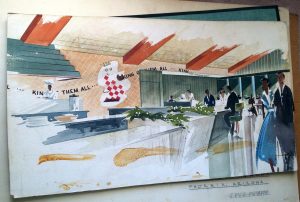 But what might surprise even the Bob’s aficionados is the Millard Sheets-designed mosaic of Navajo, Apache, and Pueblo (or Hopi?) “gods and legends,” known to us through this September 1955 article in TILE magazine.

The largest mosaic, seen above, depicted sun symbols and used background tiles from the Mosaic Tile Company, mosaic “specks” (their word) and ceramic cast pieces designed by Sheets and made at the LA County (Otis) Art Institute under the supervision of W.A. Perry, whose tile and marble company on E. Indian School Road in Phoenix then completed the installation. (This is more interesting data for the discussion of who fabricated the mosaics in the Sheets Studio before the arrival of Denis O’Connor in 1961.)

Though we only have a black and white photograph, the TILE magazine caption sounds like classic Sheets Studio work: “Vivid white, black, red and green colors on a blue background provide a pattern in harmony with the surrounding western landscape.” Sheets himself is quoted in the article discussing the tile’s durability, suggesting such outdoor, artistic use was unfamiliar. As for the American Indian nations as the source of a theme, Sheets had designed the Thunderbird air fields in the California and Arizona deserts and utilized Native American imagery there as well.

Where is this work now? This restaurant was at N. Central Avenue and E. Thomas Road, which Google StreetView suggests two massive office buildings, an empty greenspace, and a strip mall exist today. So chalk this up as another lost Sheets artwork.