Eric Abrahamson’s new book, Building Home, describes the first interactions between Millard Sheets and Howard Ahmanson, and says some about the National American Fire Insurance building. It is crucially important but hard to document, since its demolition in the process of the construction of the Ahmanson Center.

The images you see here come from the remarkable collection of mostly color sketches for sale via Alan Wofsy Fine Arts, in San Francisco; these and more appear on their website, with prices and other details. But my work in the Ravenna Mosaic Company papers have provided more insights about their fabrication and installation.

In the early 1950s, Sheets and the Ravenna Mosaic Company did work for Mike Lyman’s restaurant (unclear which one — they were once at 424 W. 6th St, on Pershing Square according to designs in the Library of Congress Winold Reiss collection; and 1627 North Vine in Hollywood and Hill at 8th downtown, according to this matchbook or Mike Lyman’s flight deck at the airport, in this old footage— all now demolished) as well as the Precious Blood church in Los Angeles. They also discuss a General Insurance building mosaic on Wilshire — which may have been for the building at Wilshire and La Brea by that name — but if so, it is gone too.

What we do have, however, is discussion of “the Firemen’s Panel” that the Ravenna Mosaic Company had done for Sheets–and the installation diagrams.

The mosaics were of course to large (and too heavy) to ship all put together, so the practice was always to create segments of the mosaic–normally pasted, face first, onto paper–and then stack and ship them to the installation site. (As we have mentioned here, you have to be careful to keep them safe from water as well as infestations, lest the paste be eaten and the design destroyed.)

And so, in order to get the installation correct, you needed a map of the mosaic, matching the pieces back into the correct order. They existed for every installation, but they were mostly destroyed — but it just so happens that the Ravenna Mosaic Company kept a copy, when they sent another to Sheets for installation. 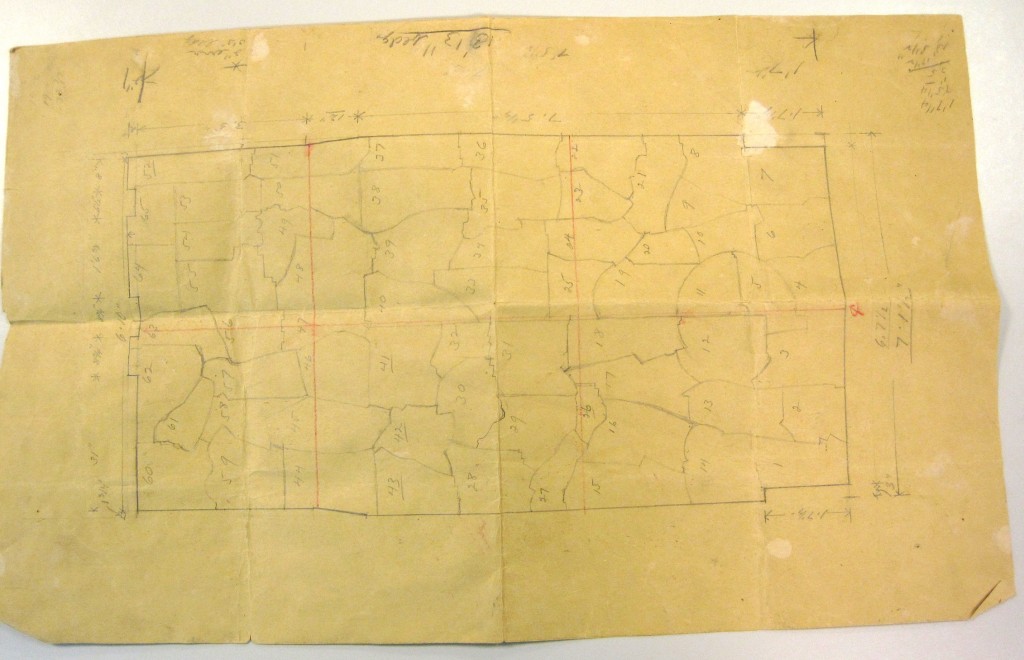 And though it is referred to as the “General Fire Insurance Company,” and it is also along Wilshire, it is clear from the shape that it was the mosaic over the door at the National American Fire Insurance Company of Howard Ahmanson, at 3731 Wilshire — and the start of a remarkable partnership in art, architecture, and urbanism.

Apropos of my talk this month in St. Louis, many of March’s posts will draw upon the eye-opening information in the Ravenna Mosaic Company files at St. Louis University, which John Waide has helped me access.

The files on this mosaic from Garden Grove have helped me resolve an ongoing question raised by conversations with mosaicist and mosaic historian Lillian Sizemore: Where does the Sheets Studio mosaic style come from, and why does it change so often? We have discussed the Ameses, the role of Martha Menke Underwood, and the later innovations of Denis O’Connor, and the last mosaics fabricated in Italy, but the questions around the initial mosaics, 1954-1960, remained: Is the style the work of Millard Sheets, or the imprint of his fabricators? Were the fabricators Italian, or Ravenna Mosaic (who are actually German), or Sheets’s own studio?

Now the Ravenna Mosaic Company records can provide an answer, in the form of a complaint.

On February 29, 1960, Arno Heudeck, of the Ravenna Mosaic Company, wrote to Millard Sheets about the cartoon received for the “proposed mosaic mural for the Home Savings & Loan Association. Garden Grove,” saying “we have studied it quite carefully.” But then there is a concern:

“You have indicated…your suggestion for handling the style, size, and texture treatment of the tesserae for this mural, including large sized tesserae. Your selections of colors and shading are beautiful, but very vast in numbers. I think it is clear that you are indicating a great deal more time-consuming work for us in your specifications. All our tesserae, it seems, will have to be cut and fitted in irregular patterns and fields; even you plain gold areas are broken up in an interesting, but obviously more time-consuming manner for us.”

And so they wrote with a higher price quote–which Mary Dane, secretary-treasurer (and all-around keep-things-working administrator) for Millard Sheets accepted on April 1, stating as “I relayed to you via telephone sometime ago: It is not necessary to break up all the areas that way (refering [sic] to your letter)….those area which are not definitely cutup [sic] into patterns may be done with regular cutting…For example, the foliage on the trees could be done with some areas fitted in regular pattern and most areas cut simply.”

On September 14, 1960, Heudeck wrote back, to ask for photographs of the finished installations, and “to ask how these last two murals we executed for you were received by you and your clients,” given “the unique manner in which you installed these mosaics into the sandblasted recessions of the marble,” and their “interpretations of the cartoons into the mosaic medium.”

Thus, it is clear that the innovations of Sheets’s design that gave it depth and life– the plane-splitting diagonal lines, the articulation of variegated color, and the contrasting colors — were innovations for the Ravenna Mosaic Company, and required a new technique (and greater cost) than their normal procedures.

Given a discussion of work for Arcadia (see my next post), it seems the Sheets Studio was already doing some mosaic work in-house–likely including the small paintings/mosaics for Compton. But by 1961, with the arrival of Martha Menke Underwood and then Denis O’Connor as  members of the Sheets Studio, they began to do all this work themselves, beginning with the Scottish Rite Temple in Los Angeles. But this letter — its surprise, its wonder, and its admiration — demonstrates when Sheets’s new style for mosaics began to emerge, despite the difficulties it left for his fabricator.