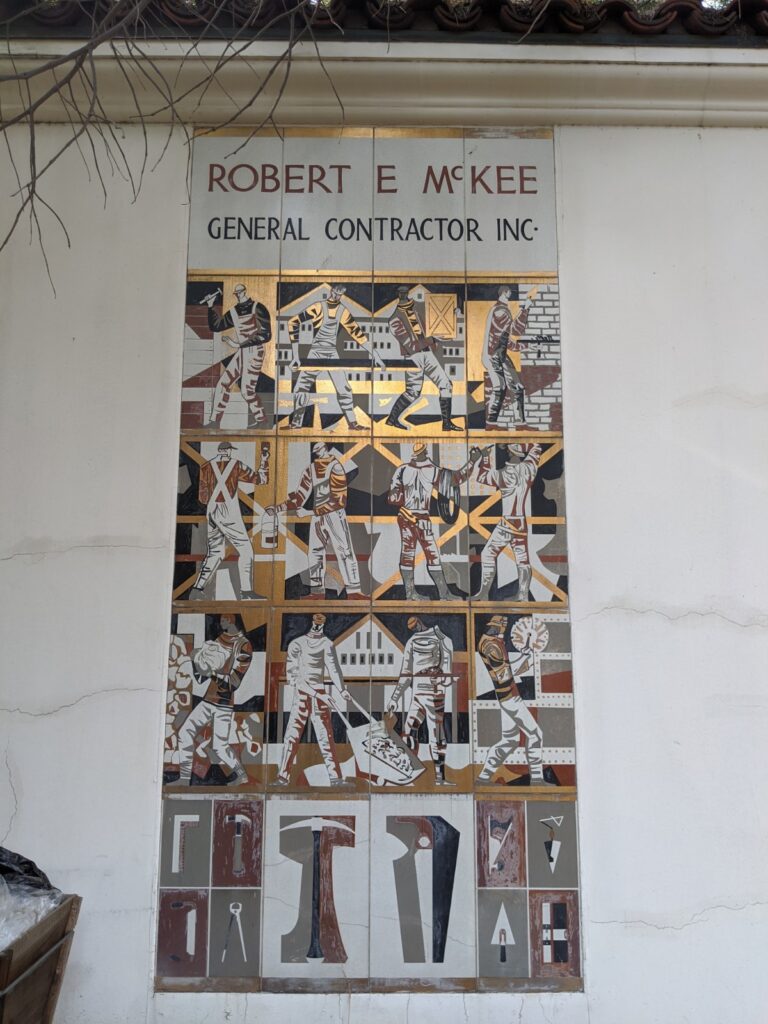 Last week I had the pleasure, through Zoom, of attending a Los Angeles Cultural Heritage Commission hearing. I spoke in support of making the former McKee Construction Los Angeles branch office an officially recognized historical-cultural monument.

The wonderful SurveyLA project found this building–a pair of Spanish Colonial Revival buildings at the edge of a larger industrial site, on North San Fernando Road in northeast Los Angeles. Their 255-page report caught the eye of Richard Schave at Esotouric, and he let me know about this line:

“Adjacent to the entrance is a large mural purportedly by Millard Sheets that faces south and spans the full height of the building. Commissioned by the building’s former tenant, a general contracting company, this mural depicts various themes in building construction and features the former tenant’s name: ‘ROBERT E. MCKEE GENERAL CONTRACTOR INC.'” (page 59)

(Fun fact for me: McKee was born in St. Louis and ran his nationwide construction business from El Paso, and his firm built many iconic buildings in Los Angeles, including LA’s Union Station, LAX, and Arco Plaza–what a history! A local El Paso historian has written it up here.)

Careful students of the Millard Sheets Studio may have all the same questions and thoughts I had–recognizing McKee as the contractor on the Los Angeles Scottish Rite Temple, with a similar full-height tableau, depicting themes in Masonic history; the vignettes of building trades on the front of the Compton branch of Home Savings, as designed by Tom Van Sant and Millard Sheets; and the talk of the artwork as a mural–which type?

At the hearing, I learned the mural is from 1961–the year that the Scottish Rite Temple and four Home Savings branches were finished, and a period when murals (in this case painted on ceramic tiles, likely from from Gladding McBean) received attention from Millard Sheets, and at least one of the primary assistants at that time: Martha Menke Underwood; Susan Hertel; Nancy Colbath; or, at the end of the year, the newly arrived Denis O’Connor. 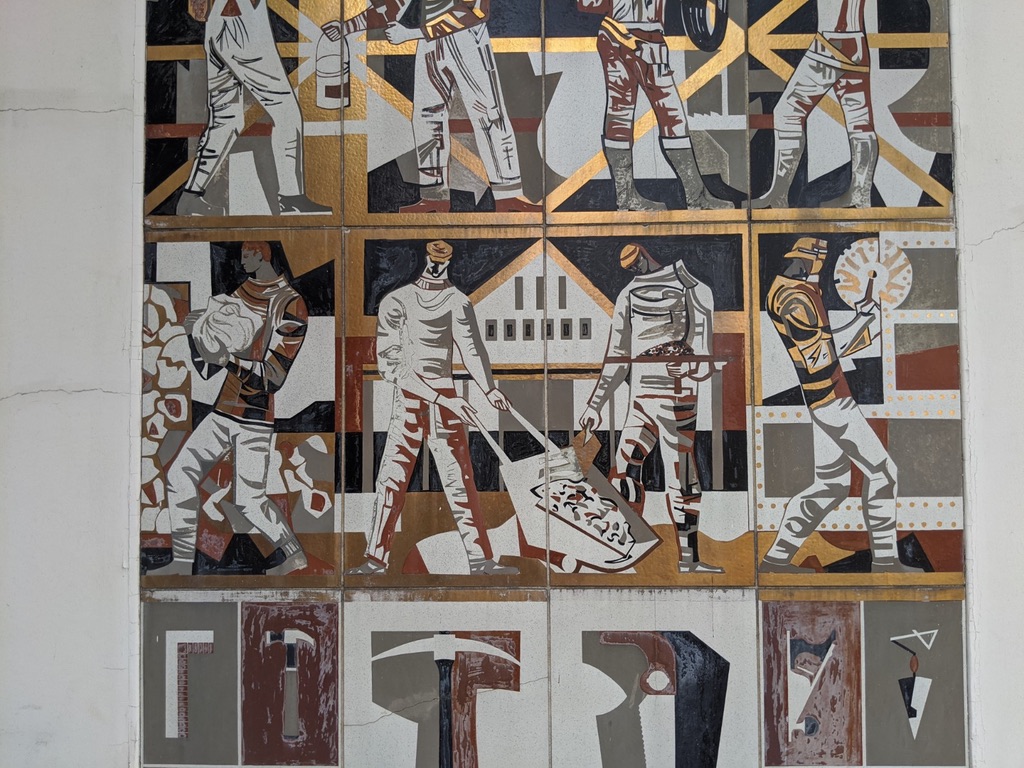 While the style doesn’t look like Millard Sheets himself painted the tiles, it looks to me like Sheets did the initial design and then someone else fabricated it–as we see in the earliest mosaics, fabricated by Ravenna in St. Louis, or in the stained glass. The Masonic symbolism and the images of construction look familiar from Compton and the Masonic halls in LA and San Francisco. In this case, the artist wasn’t as tightly tied to Sheets’s style as Sue Hertel generally was–but, as Lillian Sizemore suggested to me, the style may evoke more of what we have seen from Jean and Arthur Ames, so maybe it was one of the many joint Ames-Sheets students in the Millard Sheets Studio.

The Millard Sheets Studio ramped up long before their recordkeeping kept pace, so unfortunately the Millard Sheets Papers at the Smithsonian don’t have a file for the project, and it doesn’t seem listed on the resumes Millard Sheets used as a running list of his projects before around 1962. So it is not yet listed on my “Definitive List.” But that makes it so much more exciting to find, and to see preserved!

The building owners and the LA Cultural Heritage Commission were in agreement about the importance of the building and the mural.

And the preservation threat in Pacific Beach got front-page-local-section coverage from the San Diego Union-Tribune:

Nice to see more coverage in ⁦@UTSanDiego⁩! My first photo in the hometown paper… pic.twitter.com/VN1pBAQ8TZ

I hope that the other works needing preservation or just more care–Sacramento, Compton, Victorville, and beyond–can see such concerted community efforts as well!