As promised, I present the Northridge mosaic “triptych.” — the same format on a similar building that we saw last week in Downey. And, again, these late O’Connor-Hertel creations stretch from the very earliest of local history up to the present day.

In Northridge, the imagery stretches from a native Tongva man at an oasis to symbols of Anglo settlement, including the Hawk Ranch and the Southern Pacific Railroad, and walnut farming; to the claims to fame for twentieth-century Northridge, including Montie Montana at the annual Chamber of Commerce stampede, the local hospital, and some of Cal State Northridge‘s buildings.

The span of time and the effort to include such easily recognizable, present-day figures  furthers the long-standing Home Savings goal of integrating HS&L  seamlessly into new communities, and using the art to make a claim about their rootedness and permanence there.

As was common, the research files are filled with pictures photocopied from history books and historical-society brochures, the sources the studio used to find authentic figures to include. The notes often include captions or text not included in the final work, in this case: 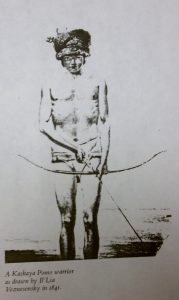 But despite labels and accuracy in many cases, a nice iconographic figure could fill in for the extensive research needed to get local conditions right at times. For example, the Native American in the files that is most closely reproduced here is a Kashaya Pomo warrior drawn by scientist Il’lia Voznesensky in 1843, in northern California near Fort Ross, as reproduced on page 307 of the (unidentified) book the studio consulted, rather than an actual Tongva image. (I have written about the importance of Fort Ross in the image of California in Ansel Adams’s photograph of a eucalyptus tree there; read it here.)

Such substitutions happen elsewhere as well — for example, an image of ice skating in Marquette Park, Illinois, draws on an 1872 sleighs and skaters in New York’s Central Park by Jules Tavernier for Harpers.

It’s a reminder that these artists are interested in history and community, but not always perfectly faithful to it. But of course we can forgive them, right?