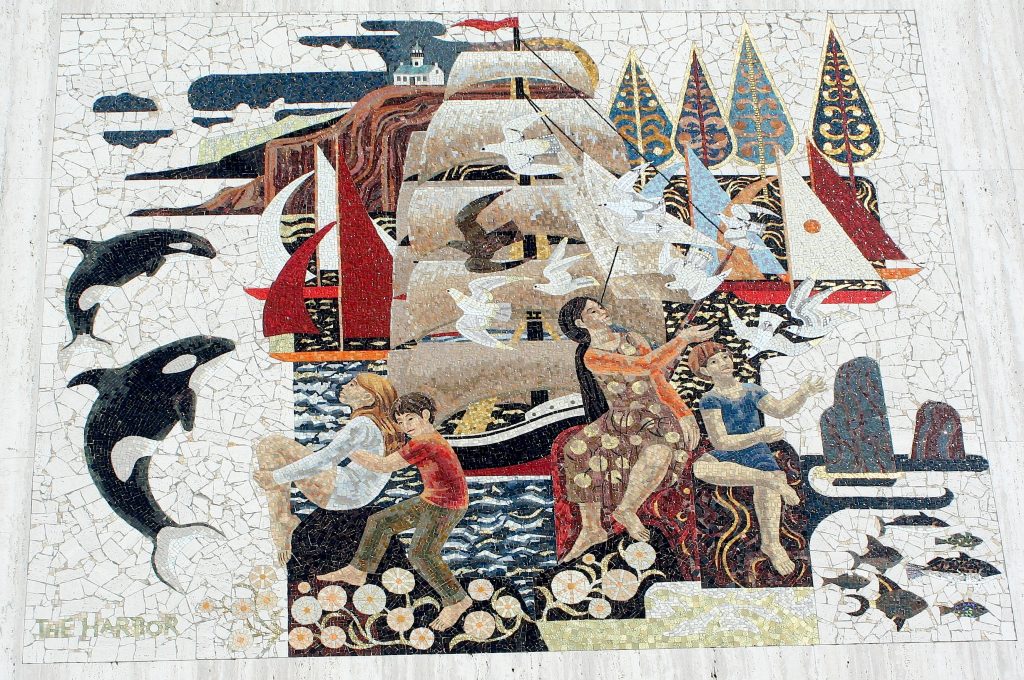 Last Friday I had a chance to sit down with Alba Cisneros — a mosaic artist who worked with Millard Sheets and Denis O’Connor for 17 years — and Katy Hertel, Susan Hertel’s oldest child (a stepdaughter), herself an artist and, like many of the artists’ children, a sometime worker in the mosaic studio.

Sitting at a mosaic-composition table, surrounded by cans and cans of tile, trying my hand at cutting and shaping a tile (not very well), we talked about many of the stages in the history of the mosaics — and I gained a good amount of insight into composition and dating of the mosaics.

In December I plan to return to the task of creating a comprehensive list of the Home Savings locations with Sheets Studio art and architecture — and which are threatened (for now, this list which I am no longer updating will have to do).

But one of the key questions is dating the works — which was from the Sheets-Ahmanson period, ending with Ahmanson’s death in 1968? Which is before Sheets turned over all of the Home Savings work to Sue Hertel and Denis O’Connor, in about 1980? Some archival files exist, but the expertise of Alba Cisneros, who started working for the studio in 1975, can, with others, help to date the artwork even when file, newspapers, or other sources come up short.

Alba remembers working on this mosaic, and has pictures of it in her personal files — and Katy looked at many of these images (I think this one among them) and said, “That’s my brother!” I learned that Sue Hertel — working every day in the Sheets Studio, then returning home to her children and a house full of horses, goats, and chickens — often drew inspiration for her family scenes directly from her own home, with family portraits included in each embrace. 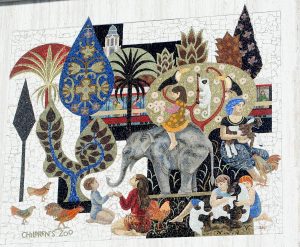 Katy and I specifically addressed the Westminster Mall family, which I discussed a few weeks back; this companion to “The Harbor,” showing, ostensibly, the San Diego Zoo’s children’s pavilion, seems to also reflect what I have heard about the Hertel homestead. (Both of the images, facing the parking lot, can be seen together here; I will come back to the masculine portraits on the front of the bank another day.)

I grew up in San Diego, going to the San Diego Zoo, caressing the chicks, seeing the orcas at Sea World (the world’s first, which opened with Shamu in 1964), playing in the tidal pools, riding the Balboa Park miniature railroad, standing near the California Tower, cavorting about the clipper ship The Star of India, and going out to the Point Loma lighthouse; in recent years, I have been privileged to do many of the same things with my toddler.

So the sense of place, of what San Diego is like for a young family, is very strong for me in these images. But, as we have seen, Sue Hertel blended her own family history into the images and ideas of the place she was depicting — and the San Diego Zoo was not allowing any elephant rides in my memory. So the images are, as we have seen, a mix of the specific and the generic, the historic and actual and the nostalgic and fanciful.

One more note on the mosaic workmanship and the dating of the images: Alba explained that, originally, each element of the mosaic would be placed within the travertine facing of the banks — and even small elements like trees or the silhouette of a sail would be carefully cut out. But after a while some cost-cutting did occur, by making more rectangular, easy-to-install shapes, and/or, as you can see in this image, using broken travertine to fill in the background and allow for the smooth visual connection to the rest of the building, without the difficult cutting.

Alba also explained that, once the mosaics were installed, members of the Studio would get up on ladders and stain elements of the image, to cover the grout, for example, with the dominant color. I think we can see a further element of “cheating” here, as the tops of the trees in the Children’s Zoo image seem to be merely painted onto the travertine above the mosaic.

I’m glad that, this Thanksgiving, I will have a chance to revisit these images, alongside my family.