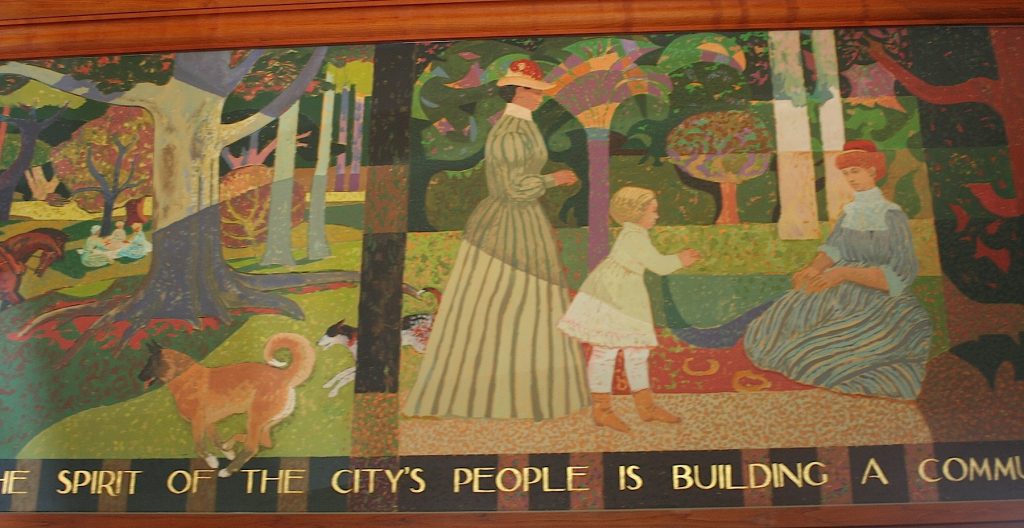 The last medium to discuss is painting. Millard Sheets and Susan Hertel both had careers as painters; indeed, they met in the painting studios of the Claremont Colleges, where Susan was a student and Millard was teaching.

Because the paintings are mostly inside the banks, images of them can be rare to find; trust me, nothing attracts the eye of a bank manager like a camera inside a bank! (I must say, though, that both the Washington Mutual and the Chase bank managers I have met have been very interested in this project, and sympathetic of its need for documentation. Those images are for reference, rather than publication, right now, though.)

The entrance in the Washington Mutual era. Note the stained glass in the rear.

I do happen to have some images from the Lombard branch in San Francisco — an explosion of art, with stained glass, mosaics (though mostly hidden by trees now, the slides in the Denis O’Connor Collection at the Huntington Library reveal their true beauty and sophistication), and a long, frieze-like painting inside. The Sheets Studio paintings are not truly murals; even the largest, as far as I can tell, is on canvas, and hence can be popped off, rolled up, and removed as needed. (This is what Tony Sheets did to the massive painting in the San Jose airport terminal recently, much to the surprise of the conservators who had thought about cutting out the piece of wall to save it.)

This frieze is truly astounding: a whole history of San Francisco, from Native Americans to Spanish to ranchers, gold-seekers, Chinese workers, Victorian ladies, the 1906 earthquake, and the city’s status as “a community both international and unique.” In the weeks ahead, I will have more images and do more research on the community aspect of this art, but I thought this image provides a nice peek at the interior paintings, and connects to the urbanist ambitions of the artwork and the Home Savings bank — defining and promoting its community.

It is signed by Sheets and dated 1977; I am not sure who fabricated the image, but I am told he chose the wording. In terms of the art’s aesthetics, what comes to mind is A Sunday Afternoon on the Island of La Grande Jatte (1884), George Seurat’s masterful, sun-filled pointillist work, on a grand scale. Sheet’s work here predates Sondheim’s musical based on the image, Sunday in the Park with George (the 1985 Pulitzer-Prize-winning play), but it does make me wonder how influential that image was in considering cultural nodes like San Francisco in the late twentieth century.

The painting’s San Francisco history does stop with the earthquake — sailboats and petticoats remain at the end of the image, not Haight-Ashbury or the then-current administration of the ill-fated George Moscone and Harvey Milk, among others.

The Sheets Studio artwork in general held images already old — a sense of nostalgia, but one informed by local history. Nostalgia is often seen as a reactionary force, but I think it is hard to say that here — so buoyant and optimistic, these images remembered happy times in the past, in order to encourage investment in happy futures.