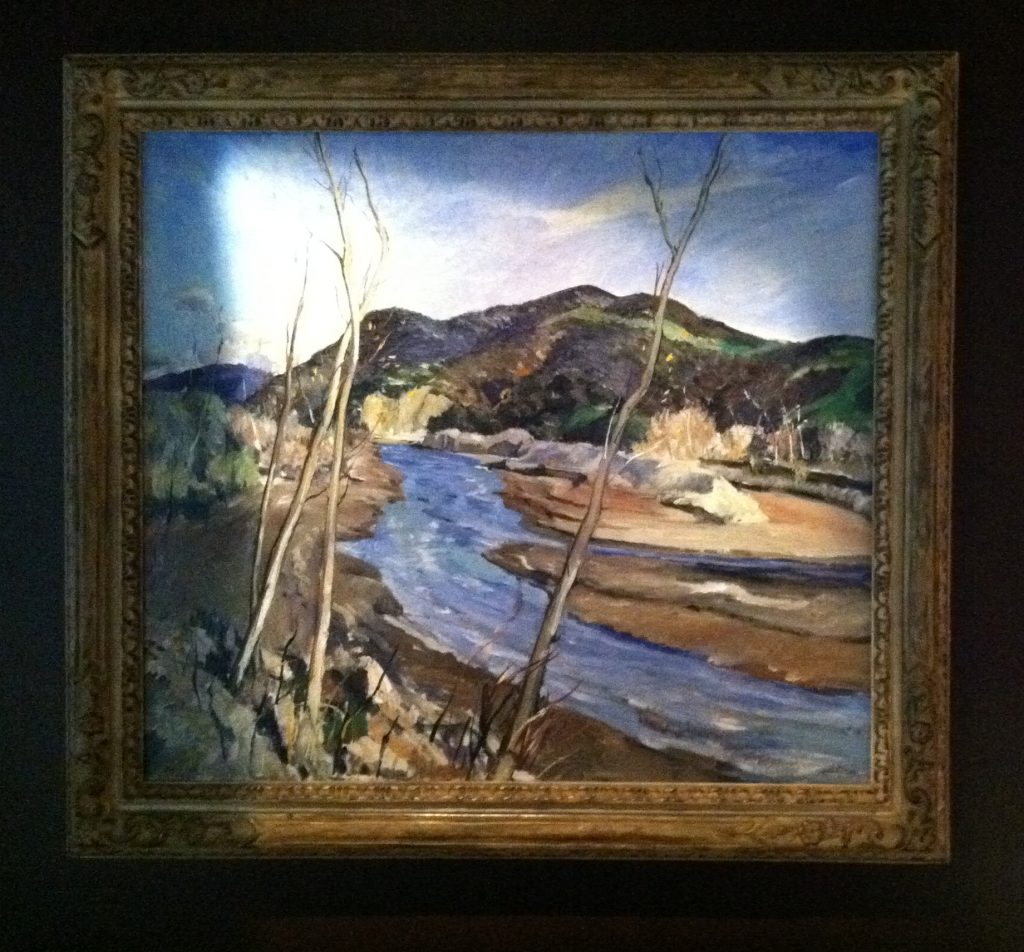 Millard Sheets cared deeply about his artwork, particularly his painting; he cared about his networks, and his ability to connect to people across career, political, or national divides; but he also cared deeply about his family, even when he was far from them. And these strands come together in the story of a painting, seen above, now hanging at the Parkway Grill in Pasadena.

Millard had known Mary’s older sister Elizabeth as a fellow student artist at the Chouinard Art Institute, and at a family dinner Millard met Mary. They hit it off immediately, I am told, but their lives seemed headed in opposite directions: Millard was gaining attention in New York and elsewhere for his paintings, and Mary was committed to her studies at UCLA (then called the Southern Campus of the University of California). 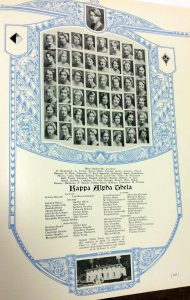 Kappa Alpha Theta Class of 1930, UCLA Archives. Mary Baskerville, the president of the sorority, is at top; Dorothy Grannis listed among the senior-class members.

Mary, an art major in UCLA’s teacher’s college, rose to be president of her sorority, Kappa Alpha Theta–and among its members in her class was Dorothy Grannis, later wife to Howard Ahmanson (suggesting occasions for an earlier connection between the two men than business breakfasts and a famous letter in 1953). Her presidency of the sorority Class of 1930 coincided with UCLA’s move to the newly constructed Westwood campus, and hence the building, funding, and decorating of the large new Greek houses in the neighborhood.

Millard wanted to get married, but Mary was also committed to finishing her degree — but in her last semester, in the spring of 1930, these two goals seemed impossibly opposed. Mary decided to leave school and marry Millard before his next trip East, to follow the whims of the art world. But there were also her duties to the sorority – how to placate them?

I am told this painting was the answer: a large oil 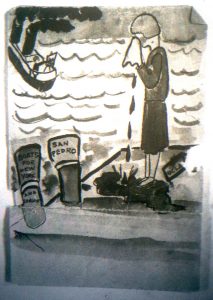 painting, showing a river landscape, given to the sorority in that spring of 1930, as the sorority president left to marry its artist. It hung for decades on the sorority walls, as a testament to the relationships between Millard and Mary, Mary and her sorority. The theme seems appropriate to such a moment of transition as it college — the crossing over of the river, the forking water path, and the question of what lies beyond, up upon those mountains.

It can now be seen amidst a wonderful collection of Millard’s paintings at the Smith Brothers restaurants in Pasadena. (UPDATE: I am told by Michael J. Johnson that a Giclée-on-canvas replica hangs in the sorority to this day. UPDATE 2: According to Susan Traister, who had the sorority’s paperwork on the transfer, “the Kappa Alpha Theta Sorority at UCLA owns it and loans it out to the Smith Bros.”) Perhaps that is the perfect place to celebrate Mother’s Day this year, and think about the interplay of family, art, and community for Millard Sheets.

Thanks to Carolyn Sheets Owen-Towle, Perry Jamieson, Christina Vader, and Bob Smith for providing/confirming elements of this story.