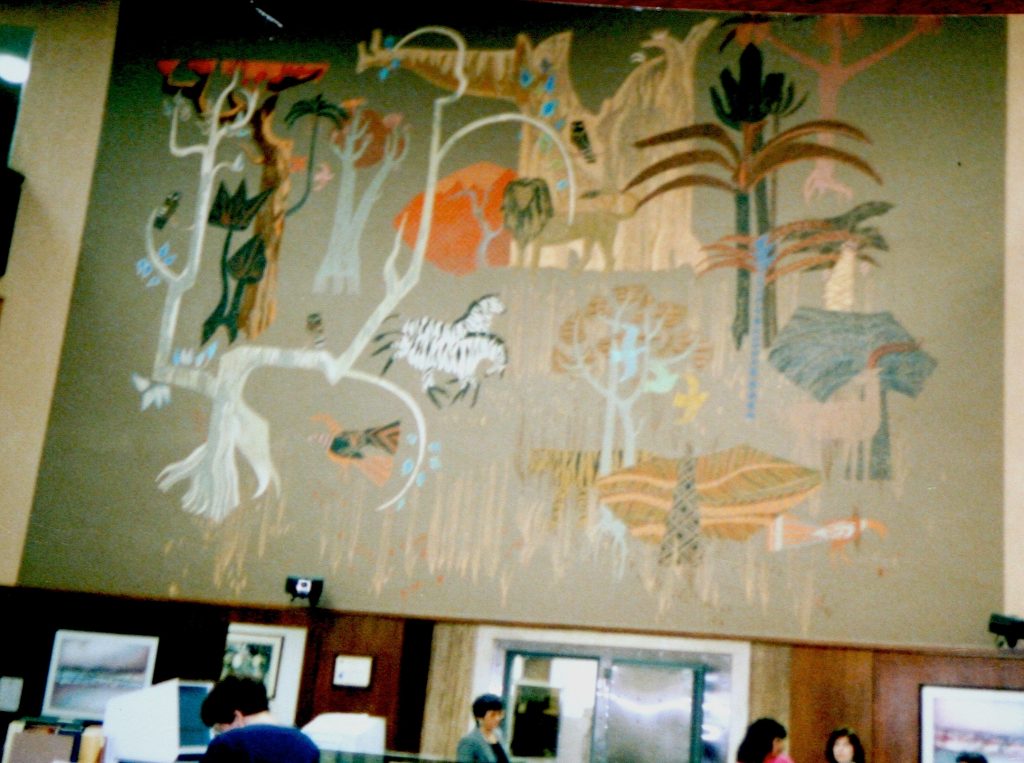 It seems like something out of a Dan Brown novel: there is a Sheets Studio painting, hiding in plain sight. 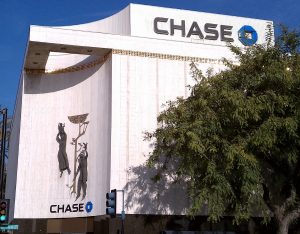 Statues over the corner door, Burbank, 1969

Last month I visited the Burbank Home Savings branch, and I could tell there was something fishy. On a prominent corner, the three-story structure dominates its site, with ornate sculptures high on the corner, and a mosaic of family life welcoming guests from up the hill.

Both works show family theme in full: a family reaching high into the tree, and children on the horses of a merry-go-round, a reference to the amusements of Griffith Park. 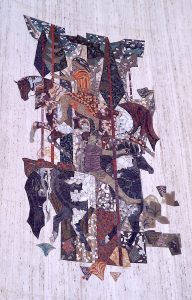 Children on a carousel, Burbank, 1969

Though I could not find signatures, it looked like the work of Sue Hertel and perhaps Al Stewart, familiar Home Savings themes.

But it was when I went inside that I felt something missing. Like many former Home Savings banks, the large lobby had been subdivided into cubicles, and the balconies enclosed (in mismatching drywall). The travertine here was pinstriped with black lines, and a clock in the original was maintained, directly across from the teller’s windows, but it seemed like something was missing.

For such a large, prominent branch, no inside art?

Well, Carrie McCoy told me how things used to be. She had worked three decades for Home Savings, working her way up into the branch’s management, and still on hand when the sale to Washington Mutual occurred in 1998. And she had what seems to be the only photograph of the bank’s painting, of the LA Zoo, its angular trees and casual animals suggesting a collaboration between Millard Sheets and Sue Hertel. (No signature is evident in this photograph.)

And Carrie also knew what happened to it, and had the documentation to prove it. The LA Zoo painting was not destroyed; it was not removed, either. As far as she or I know, it remains in place, for in 1992 the Home Savings branch manager decided to cover it, in a renovation, and Carrie had copies of the specs from TG Construction of El Segundo, who did the work, from new paint and some window replacements to the order to “cover existing art work, approximately 24′ x 24′, at bank lobby area.” The plans show the drywall and studs used to protect it.

Those involved must have assumed this was their only choice, but as Tony Sheets has proven at the San Jose Airport Terminal and elsewhere, the paintings were almost always done on canvas, and hence they can be popped off the wall and rolled up, as needed.

Carrie said she mentioned this to the Washington Mutual, and then the Chase managers; perhaps this new announcement could get it uncovered, either for display in the bank, where it was intended, or at a nearby museum that also celebrates California and the West, Griffith Park, and the community — the Autry National Center.

Happy 2011! The definitive list of Sheets Studio public buildings is coming a bit slower than expected, but the addresses and status of the 200+ sites I have identified will be available in January.