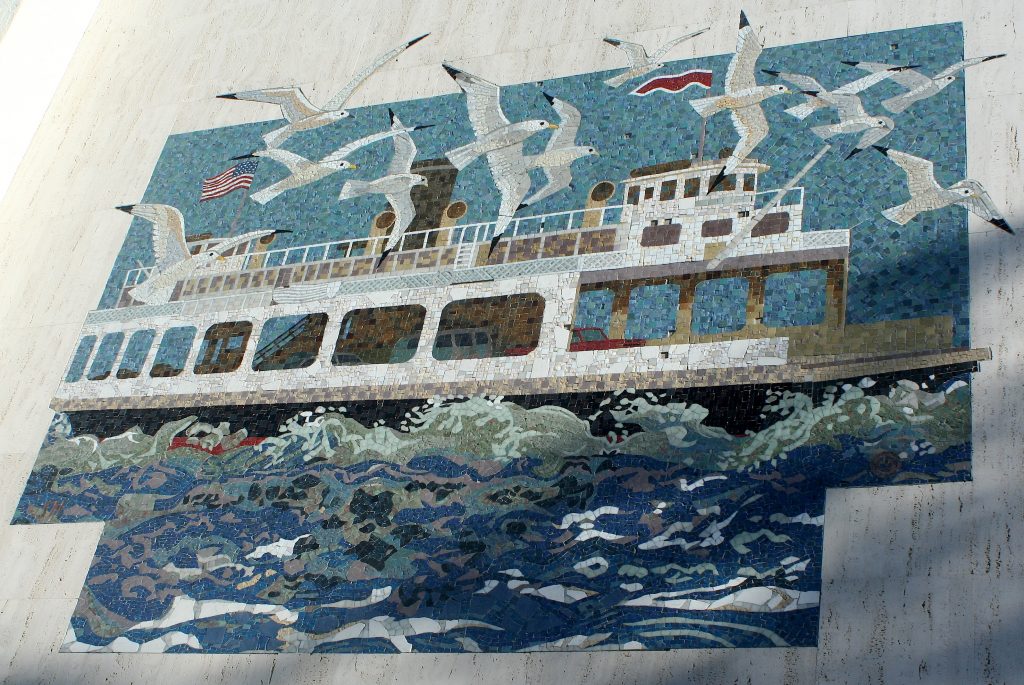 On Thanksgiving Day, while my toddler napped, my father and I drove over the San Diego-Coronado Bay Bridge to take a look at the former Home Savings (and now, former Petco) at the center of the business strip on Orange Avenue in Coronado. 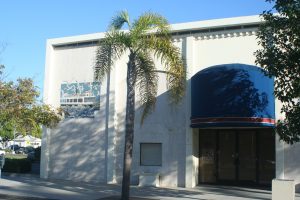 When I arrived to see this building, however, it made a bit more sense — in part because this was hardly a typical Home Savings building. It was a corner property on the main business thoroughfare, with a sizeable parking lot, but the site had been misused by those that built it; the corner was given over to parking, and the building — not, clearly, built as a bank originally — squeezed into a row of storefronts. It had been a not-very-prominent bank, then a too-small Petco; now it sits empty.

The artwork, which my files can date to 1985, is small, a modest addition to this preexisting building. But the work does hold some of the earlier themes — a joyous and iconic local experience, crossing the commuter ferry to San Diego — and a few seeming technical innovations. 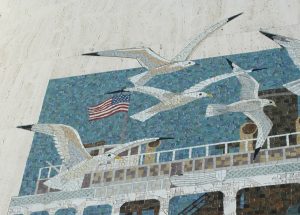 Detail of the wing, cut into the travertine, 1985

As I noted a few weeks back, Alba Cisneros had described the difference between cutting the travertine around the small elements at the edges of a rectangular piece of artwork vs. finding ways to “cheat” it, by using broken travertine like mosaic pieces or simply staining/painting those edge details onto the building.

Despite the late date of this work, Hertel and O’Connor nevertheless were able to carefully cut the travertine to match up with the gulls’ wings, a few matching the rectilinear lines but the one at the center top bolding taking its mosaic wing at an angle, at great cost but greater beauty.

Even though the color palette of this mosaic is lesser — fewer offsetting Color Field-like choices — the craftsmanship on these tiles on planar surfaces — the sky, the rocks, the birds — seems unsurpassed, so dynamic and intricate, compared to some of the earlier compositions.

A nice sight to see over the holiday, and a nice reminder the questions of complexity, cost, theme and color do not simply rise and fall in the history of this artwork.