Hello everyone! I hope you enjoyed the Fourth of July.

On my jaunt through the Orange County and Los Angeles beach cities last week, I drove by this former Bank of America building designed by Paul Revere Williams, the first African American member of the AIA and a distinguished Los Angeles architect of the early-to-mid-twentieth century. (Read more about Williams’s remarkable career here and in two recentbooks by his granddaughter, Karen E. Hudson.)

The Millard Sheets Studio mosaics for the Van Nuys and Long Beach branches are done in a different style than the contemporaneous Home Savings work — and there is a comment in the studio correspondence saying that “if mural is executed in the United States add $10 per square foot,” suggesting that Williams, Sheets, or both had connections in Mexico, Italy, or elsewhere that could do the fabrication. (It is unclear where these were fabricated.) 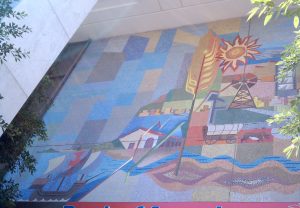 In terms of style, both Van Nuys and Long Beach seem closely aligned with mosaics done by Ben Mayer, including those from the Norwalk Public Library on friend-of-the-blog Vickey Kalambakal’s site — check them out! The timing matches the period when Millard Sheets was becoming more involved with Interpace’s ceramic tile projects, and he seems to have broken any exclusivity deal he had had with Ahmanson and Home Savings. Mayer’s name appears in the Sheets Studio invoices for the Van Nuys location, but the affinity is also evident in the Long Beach work. UPDATE: Another colleague, Lillian Sizemore, has done research to confirm Ben Mayer was the creator, with Maurice Sands listed as design and color consultant, and has found that the Long Beach branch opened June 20, 1967. Interestingly, the (earlier?) Van Nuys branch has a Sheets signature, the Long Beach branch does not.

While the Van Nuys branch is still a Bank of America branch, the Long Beach building was most recently a music venue, and is again under renovation. One hopes the importance of the architect and the connections present in the mosaic to local and regional history will help preserve this building and its artwork.

M. Danko of socal-bank-art.blogspot.com has images that far outpace my own.