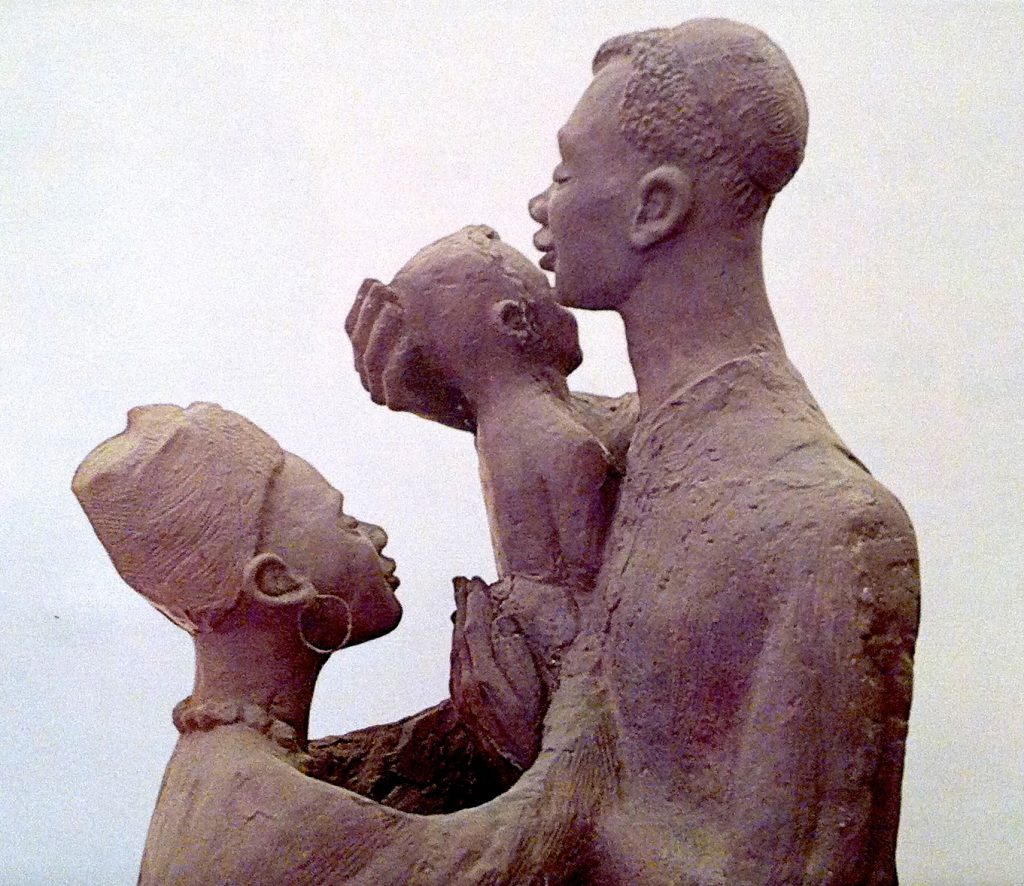 One of the themes I am pursuing in this research comes from my urban-history background: How did Home Savings relate to the multiracial, multiethnic population of southern California? Did it rely on old mental maps from redlining and housing covenants to drive its lending, or socioeconomic data, or did it buck the conventional wisdom of the time?

Twenty years after the L.A. riots and a month after Rodney King’s death. we still have news about racial discrimination by banks–but also stories about how the aftermath of the riots led to real change in South Central (now “officially” just South L.A.).

My hunch is that Home Savings had a record about the same as its competitors. A colleague who grew up in East L.A. remembers none of this ornate art at his family’s Home Savings branch, suggesting that these commissions may have remained in affluent neighborhoods.

But there is the history, still incomplete, of the Compton branch from 1958. And there is this sculpture, by Vertis Hayes, once at the Home Savings branch, at Vermont and Slauson near the heart of South Central.

Hayes was born in Atlanta in 1911 but moved to New York City to study art in the early 1930s. His most famous work was leading the team which created WPA murals for the Harlem Hospital Center. Hayes headed the Federal Art Center in Memphis, Tennessee, from 1938 to 1939, and held a number of teaching jobs, including after moving to Los Angeles in 1951, where he taught at California State College and Immaculate Heart College. He died in Los Angeles in 2000.

While the Compton branch showed (white?) workers, the South Central sculpture shows a family group–a common Home Savings choice–but, in this case, African Americans wearing what seems to be traditional African accessories, including a taqiyah (sometimes called a kufi) for the man, a traditional Islamic cap adopted by various Afrocentric / Black Arts supporters in the United States. But I haven’t seen a picture of the whole sculpture, so I can’t be sure of the whole theme.

This Home Savings branch was destroyed in the L.A. riots–as was the headquarters branch of Broadway Federal, a bank founded in the (informal) Jim Crow era of California history by architect Paul Revere Williams to serve those minority communities not served by other banks. Home Savings committed to rebuilding both  branches and utilizing minority-owned construction firms— though the resulting Home Savings building is a concrete-block rush job, with metal gates to pull down over the glass doors at night.

And the sculpture is gone. I can’t find any traces of where (nor much about Hayes, who lived and worked in Los Angeles for many decades, even in the Pacific Standard Time show at the California African American Museum.) Anyone have a lead?

Thanks for the image to George Underwood, who worked for Galaxy Advertising when it was the in-house firm for H.F. Ahmanson & Co. printing and thought up the idea of using Home Savings art and architecture to decorate the annual calendars.