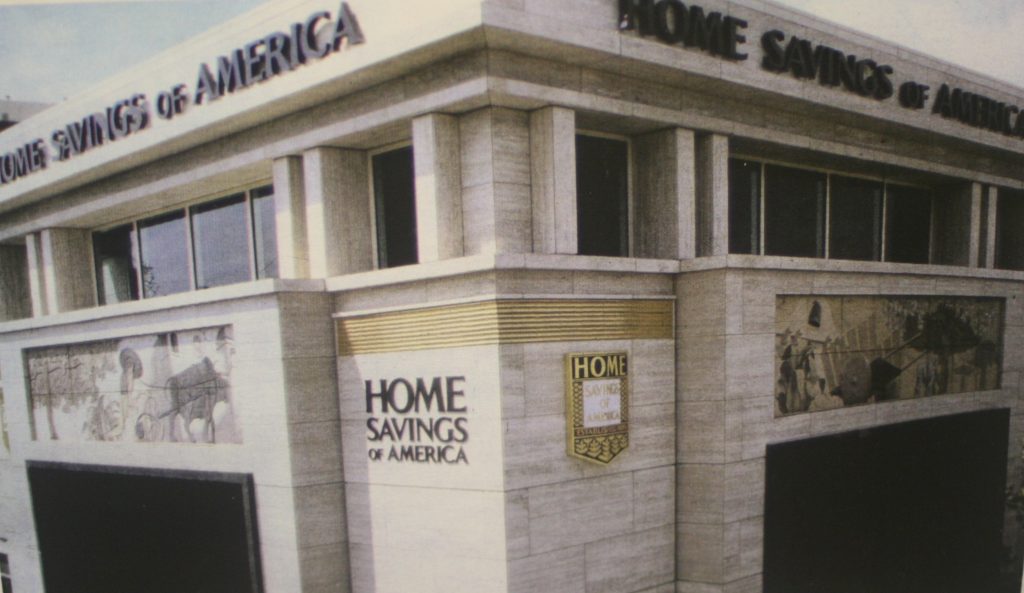 It is great that the Millard Sheets Papers and the Denis O’Connor Papers have been donated to archives.They provide a tremendous amount of detail about the art and architecture of Home Savings, starting in 1954. There, the work of the Sheets Studio team is documented — a changing cast including these two men; their main collaborator Susan Lautmann Hertel; architects S. David Underwood, Rufus Turner, Robert Kurtz, Robert Nilson, Milton Holmes, F. Arthur Jessup, and Francis Lis, and Frank Homolka and Jess Gilkerson of Long Beach; contracted sculptors such as John Edward Svenson, Betty Davenport Ford, Albert Stewart, Renzo Fenci, and Paul Manship; John Wallis and Associates for stained glass fabrication; other Pomona Valley artists such as Arthur and Jean Ames, Martha Menke Underwood, Melvin Wood, and Sam Maloof; studio regulars including Nancy Colbath, Alba Cisneros, Brian Worley, and Jude Freeman. More than 200 projects are documented in this way (though the records remain incomplete, as described here).

But then there are at least 14 other Home Savings buildings with art and architecture to consider. Starting in 1989, Home Savings (then expanding as Savings of America into Florida, New York, and other states) decided to cut ties with Denis O’Connor and Sue Hertel, for reasons I have not quite figured out yet. At first, Home Savings fine arts coordinator Kristen Paulson added artists such as Steve Rogers, Richard Haas, Roger Nelson, Marlo Bartels and Astrid Preston, and in the final few years of commissions, these artists replaced O’Connor, Hertel, and the Sheets Studio method.

Why? Was it cost? Theses final works are mostly painted flat-tile artworks, still painstaking but less expensive than the traditional Sheets Studio mosaic. I am seeking out these artists to learn more, and I had the pleasure last month of interviewing Steve Rogers. 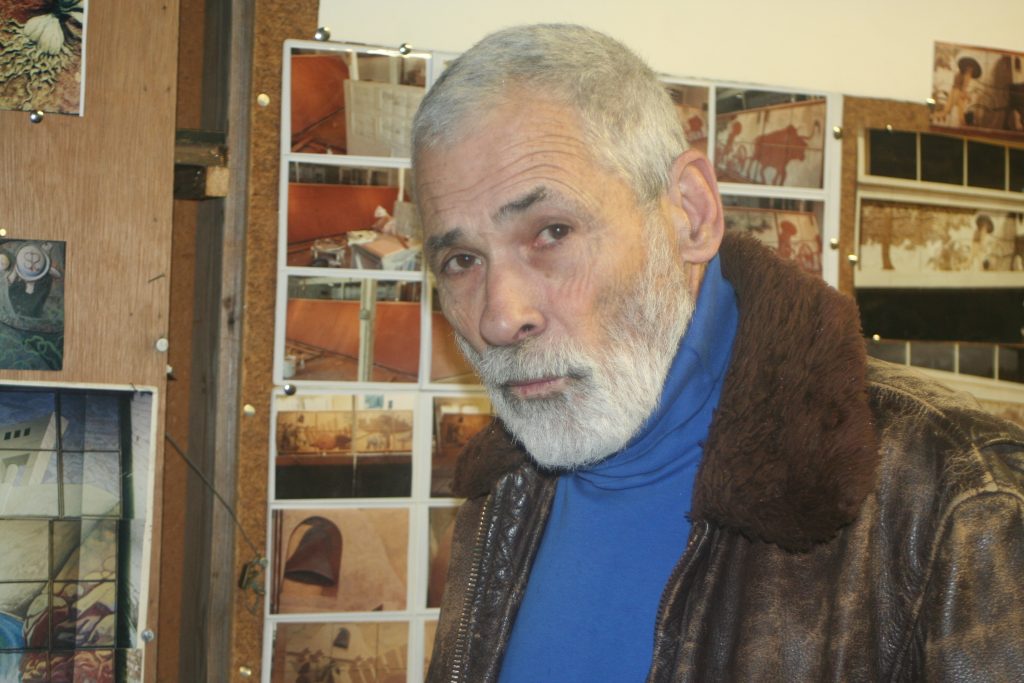 Steve Rogers in his Upland studio, 2012, with images from the Home Savings project

Steve first gained attention for his bas-relief panels of boxing scenes; in 1989, he received the Home Savings commission, and afterwards did a marvelous scene in the lobby of the Los Angeles Metropolitan Water District, the relief on the tiles jutting forward with the rush of the water. He has been recently working on fantastical images of chickens, showing the same energy and attention to bright colors and contrasts that his earlier work has shown.

Speaking with Steve Rogers and seeing his notes and files from the Home Savings commission, I was struck by how similar the process remained from the earliest works: choosing a theme that reflected local history or community; input from the artist and the bank representatives on themes and edits to make; and then the logistics of fabrication, engineering, and construction to get the image ready for permanent display along a busy street, over the door in earthquake country.

From the street (as we saw on the Autry bus tour of the Valley Home Savings sites), it looks easy, and simple: those images of Day Begins and Day Ends (titles the artworks should have but that are not on the pieces, another characteristic omission) at the local mission, the carreta out front, the man hard at work.

But, from the files, you can see the negotiations, the short time frames, the worries and contract provisions that went into making this art. From Steve, I got the same sense of what I can find in these files: this work was exhilarating, but the uncertainty could also be unnerving — Would it be done in time? Will I make any profit? Will there be another commission? Steve’s work shows the same knack for crystallizing the sentiment of the community, but unfortunately, he has not been chosen for similar projects after the Metropolitan Water District.

I am in touch with more of these artists, and I welcome contact from even more artists, and their bank liaisons. I look forward to sharing more of the stories from the oral histories on the blog and in the eventual book.